Burke found a way to get himself a top six forward without having to move any of his top prospects or Tomas Kaberle. It was as if he asked the Hawks for change for a $100 dollar bill, got his change, but slipped the Hawks a $20 grifter style.

Brian Burke does it again… 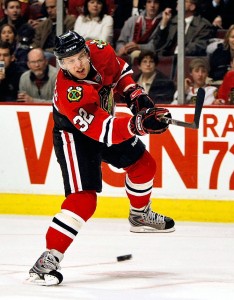 He found a way to get himself a top six forward without having to move any of his top prospects or Tomas Kaberle. It was as if he asked the Hawks for change for a $100 dollar bill, got his change, but slipped the Hawks a $20 grifter style.

I get it, the Hawks were up against it and needed to move some salary, but I sort of expected them to get a little more bang for their Versteeg. With all of the talk about multiple teams lobbying for Versteeg during the draft and this was the deal they chose? How bad were those draft day offers?

It is with trades like this one that Burke will make the Leafs a contender sooner, rather than later. He has pulled off some great swaps since taking over the Leafs and this will go down as one of his finest. It shakes out as such…

The Leafs pick up Kris Versteeg and Bill Sweatt from the Hawks in exchange for Viktor Stalberg, Philippe Paradis and Chis DiDomenico.

Though the package that the Hawks picked up could eventually develop into something more, at this stage we have to chalk this up as a major win for the Leafs.

Versteeg is only 24 years old and has already been a contributing member of a Stanley Cup Champion. The 5’10” 180 lb Versteeg notched 14 points (6G-8A) in 22 games en route to the Hawks Championship earlier this month. He should continue to develop and will slide right into a top line role with the Leafs.

Sweatt is known mostly for being a speedy winger who often depends on his speed to make an impact. Central Scouting had this to say about him upon his being drafted by the Hawks in 2007.

A skilled forward with the ability to make plays… is a great skater and creates a lot of chances with his speed… is a hard worker and very determined each shift… has good puck handling skills and good anticipation… needs to get stronger and needs to improve his ability to fight through checks.

Stalberg is also 24 years old, but has driven the Leafs crazy. He is one of those players that you just keep waiting for to emerge, but he has yet to do so. He does have some nice upside, which is why he was probably an attractive choice for the Hawks to pull back in return. He is a big boy at 6’3” 210 lbs, which could make him a forceful forward in the slot and in front of the net if he puts it all together.

NHL Central Scouting’s Chris Bordeleau says:
“I think Philippe has more skills than his offensive record shows and a good upside. He’s a good skater, with good size at 6’2” and he can shoot the puck. He goes to the net well and has good ability to score.”

One web based scouting report featured on “the Curse of Frank Mahovlich” blog on DiDomenico says:

He is a gifted scorer something the Leafs are in short supply. But he also has tremendous character and determination. He is only listed at 5’11” and 165 lbs and just an ordinary skater. But DiDomenico is an excellent penalty killer and at taking face offs. The only thing working against him is the lost 2009-10 season which likely held back his development.