Our own Amber Alexander recently took in her first NHL hockey game in the flesh. Though she has watched hundreds on television, she had never seen the boys play in person. Here is her experience… 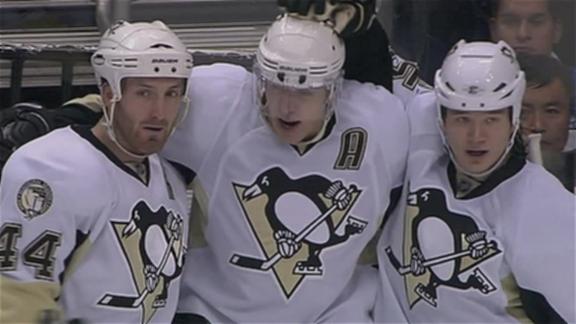 (Ed’s note: Our own Amber Alexander, who lives down south and doesn’t have many opportunities to see the Penguins play in the flesh, took advantage of the team’s trip to Atlanta this past weekend to take in her first live NHL hockey game. I thought it would be a neat idea for her to relay her experiences, her likes, her dislikes etc. Here is her take on the event and everything that went into her first “in the flesh” hockey game.)

My first live hockey game happened this past weekend in Atlanta.

It started out with a five hour drive from my home state in Mississippi…with my mom. It was definitely boring at times and exciting as well.

When Saturday finally came we woke up and got ready for the day. Our hotel was right outside the arena so we were pretty excited about that. Of course my mother noticed one good thing about being so close.

“We can drink all we want and not have to worry about a ride!” Yes she’s pretty awesome.

Anyway we spent the day creeping at the arena in hopes of seeing someone from the Pens.

The awesome thing about Philips Arena is that it is inside the CNN center, which is where CNN actually broadcasts from. Of course, we played tourist and took a tour of CNN. By the time 4 o’clock came around we were sitting right outside the entrance of the arena.

Throughout the day I started noticing more and more Pens jerseys. While we were sitting there about 20 more Penguin fans showed up and sat with us. It felt like a home game.

The workers at the entrance were pretty strict about letting anyone in before 6. So when I say they opened the doors right at 6, I’m not kidding.

Our seats were right behind the net, seven rows up and I was on cloud nine! If you follow me on twitter you already know this.

We waited about 30 minutes or so before the guys got out on the ice. The Thrashers were in fact booed by the fans and the Pens were cheered – I have the video to prove it! But this was a pretty empty arena EXCEPT for Pen fans.

I watched the pregame skate really closely and the guys were right in front of me the whole time.

It was amazing to actually see how they act on the ice.

Sid was serious, laughing only when Dupes almost fell.

Geno and Asham were always in sync with each other. What I mean is when Geno went, Asham went right after him. They were in line together with all the drills. They definitely have chemistry together.

The story starts out with two girls having a sign that says “Max teach me how to dougie!” He skated by, read it and then came back around the net to read it again before “trying” to do the dance.

What made it funnier was that he definitely didn’t do the dougie!

I guess FSN didn’t see him on the ice but I can say that he skated right to the bench before going into the locker room with Chris Stewart going after him. Geno and Dupes were on the ice laughing at him, with Malkin actually bent over laughing.

The game gets started and you can hear those who were rooting for the Thrashers were trying to give their team the home advantage. There were some boos for Crosby and Malkin, but that was followed by some “Let’s Go Pens” chants.

The game was intense and my mom provided another funny moment. Following the Rupp fight she said, “Are they in timeout or something now?” Sarcastically of course.

Malkin’s goal was scored right in front of us and I actually was able to find myself in the crowd jumping up during the highlights.

We were surrounded by all Penguin fans except for a few Thrasher fans below us. Mom and I were enjoying ourselves to say the least.

One thing I did notice were plenty of dirty hits behind the play by the Thrashers. It seemed as if they were targeting Sid and Geno which led to the confrontation between Talbot, Rupp and some of the Thrasher players.

By the end of the game, when Geno netted his hat trick goal, we were all on our feet celebrating and cheering for the guys when few guys in front of us were trying to get their hats onto the ice. But we were behind the protective netting. They tried to go in between the net and the boards.

Well, that cause a bit of a problem for security and it led to two of the guys being escorted out by the police. Of course the guys were chanting “Let’s Go Pens” the whole way up.

The whole experience is one I will never forget and I can’t wait to attend another one in the future!