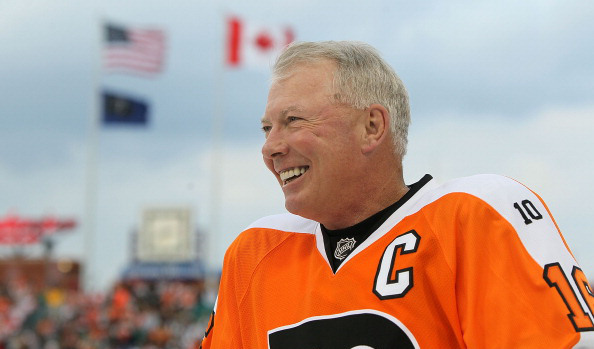 by Vince Comunale
Special to From the Point

Recently Bobby Clarke, the Flyers’ Senior Vice President, took a not so subtle dig at the Pittsburgh Penguins in the Philadelphia Inquirer as the 40th anniversary of the Flyers’ last Stanley Cup championship came and went. His quotes are below:

“We’ve been to the Finals so many times and played so good and so hard and didn’t quite get it done,” said Clarke. “It [angers me] that teams try to lose continually to come up with the (Sidney) Crosbys . . . and (Evgeni) Malkins” in the draft.

“The Flyers have never intentionally tried to lose. That would put a foul taste in my mouth,” Clarke said. “Who wants to be a part of any organization like that? I wouldn’t want to be.”

Well, I’m going to respectfully disagree with Mr. Clarke. I’ll readily admit that the Penguins probably did tank games in order to draft Mario Lemieux way back in 1983 when the last-place team overall was immediately awarded the first overall pick. However, I would strongly disagree that the Penguins purposely tanked games to draft Evgeni Malkin and Sidney Crosby. The fact of the matter is that the system was so flawed before the 2004-05 lockout that it allowed for only about six teams, the Flyers being one of them, to wildly throw money at players while the Penguins could barely afford to retain the services of the likes of Rico Fata and Dick Tarnstrom. That’s right, the system favored teams like Philadelphia for well over a decade, yet they were not able to take advantage of it.

Since Mr. Clarke is critiquing the management style and drafting of the Penguins, let’s closely examine the Flyers’ track record since the Penguins drafted Malkin and Crosby.

In 2007 the Flyers had the second overall pick and selected James Van Riemsdyk. In 2004 the Penguins had the second overall pick and took Evgeni Malkin. Malkin is still with the Penguins and a perennial all-star, Van Riemsdyk was signed to a six-year contract extension and then subsequently traded to Toronto in June 2012 for defenseman Luke Schenn.

Prior to the start of the 2011-12 season the Flyers had to use both of their compliance buyouts because of their frivolous spending. They bought out enigmatic goaltender Ilya Bryzgalov after just two seasons of a nine-year, $51 million contract signed prior to the start of the 2011-12 season. By buying him out they in essence agreed to pay Bryzgalov approximately $1.643 million per year for 14 years to not play for them. That same summer they bought out forward Daniel Briere. The then-35 year old Briere had two years left on his eight-year, $52 million contract, which paid him $6.5 million per season.

The Flyers also got lucky in a sense with the Chris Pronger contract in that he can be put on long-term injured reserve because of his concussion problems or they may have had to buy him out too. He signed a 7-year, $34,550,000 contract at the age of 35, which means that he would have been 42 when the contract ended. Even though he has not played a game since November 19, 2011 the Flyers will be paying Pronger until the end of the 2016-17 season.

As for Clarke being proud of his team being consistently competitive, what has it gotten them? Further, ask the St. Louis Blues what 25 straight years of making the playoffs (1980-2004) and being consistently good got them. The answer is nothing. During that streak they did not play in a single Stanley Cup Final and the franchise has still never won a Stanley Cup. Years and years of “middle of the pack” draft picks never allowed the Blues to get a high draft pick, say in the top-ten, to replenish their high-end talent.

The Chicago Blackhawks are the model of how to win in today’s NHL. They built their team through the draft because of some lean years they had in the early-mid 2000’s. Much like the Penguins, those lean years allowed the Blackhawks to draft superior talents like Jonathan Toews third overall in 2006 and Patrick Kane first overall in 2007.

Despite the fact that the Blackhawks had to be dismantled ahead of the 2010-11 season due to cap constraints after winning the 2010 Stanley Cup, they continued to draft well and make shrewd free-agent signings like Marian Hossa. In fact, the 2015 Blackhawks team that will compete in the Stanley Cup Final has 11 players that they drafted on the roster, which have accounted for 67 percent of the team’s point total.

Mr. Clarke asked who wants to be a part of an organization that lost for years and then drafted players with their high draft picks, well perhaps he should ask all of the players on the Penguins and Blackhawks that have Stanley Cup rings.

(Vince Comunale covers the Penguins and National Hockey League for the Sports Xchange and the Fischler Report. He can also be heard Wednesday afternoons on Penguins Live on Penguins Radio 24-7)