Penguins blown away in sloppy third period by five unanswered Bruins goals…drop to 7-8-1 after 7-4 loss. 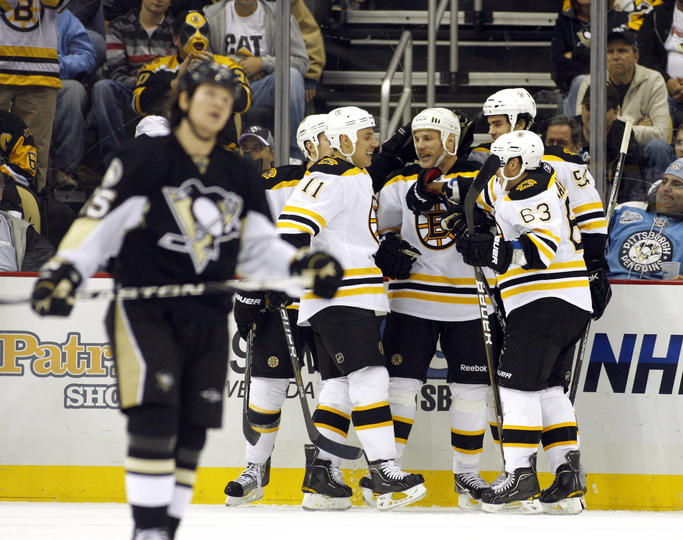 “If you play only 40 minutes, you’re not going to win a lot of hockey games…” – Kris Letang

That quote pretty much sums up the evening for the Pittsburgh Penguins, though it really doesn’t tell the entire story of this game. Yes, you can definitely make a case that the team has not been putting in full 60 minute efforts, but eventually you have to acknowledge the fact that there is more to it. There are problems that have got to be addressed and to this point it doesn’t seem as if adjustments are being made.

The team is not playing good defensively. Is that a matter of the defensive structure? Not according to Sidney Crosby.

“The defensive structure was fine in the first two periods,” Crosby said when asked specifically about his team’s defensive strategy. The Penguins captain didn’t want to point fingers in that direction and deflected the criticism away from the system and the defense, blaming it more on a series of egregious errors.

No matter what any player or coach says of tonight’s performance, it was very interesting to see how the team fared when Brent Johnson wasn’t on top of his game. Which he really couldn’t have been tonight, as he has been one of the players in the room fighting the flu. Having him play at a more mortal level showed some big time liabilities. Without him being able to erase all of the mistakes, the results looked a lot like those on the nights in which he hasn’t played in the game… if you get what I am saying.

That isn’t to say that there is something amiss with Marc Andre Fleury, just that average performances in goal aren’t going to cut it for this team no matter who is in net and that isn’t a good thing.

I remember thinking that last year’s team had trouble holding only a lead, but this year’s squad is taking that to a whole new level. There have got to be some kind of consequences after this kind of collapse. If the Penguins want to be considered one of the best teams in the league, as I know that they do, they simply cannot allow any team, not even one who is playing as well as the Bruins have been this year, to roll them in the third period in their own building. Five unanswered goals is a pretty embarrassing way to return from a long road trip… just saying.

I realize that I am railing a bit, but it needs to be said. Now on to some misc. observations about the evening…

First of all, Alex Goligoski played one of his worst games of the season. He was beaten for at least two, maybe even three of the Bruins goals in the third period. He also fanned on multiple scoring opportunities. I think that a lot of his defensive deficiencies were ignored early in the season based on his gaudy point totals, but if you aren’t getting it done on either end of the ice, maybe a night in press box would do him some good?

Evgeni Malkin played one of his best games of the season tonight. I noticed him on almost everyone of his shifts and he was galloping around the ice that way that he does when he is successful. He almost was playing with that Ovechkin-like bull in a china shop mentality and he almost hurt himself while doing so when he crashed into the B’s Scott Thornton. Malkin finished the night with 2 assists and probably could have had more if Tim Thomas hadn’t made a couple of nice saves on him throughout the evening.

Sidney Crosby also had a nice evening, as the Penguins’ captain picked up 3 points (1G-2A) and looked like a very hungry hockey player. He also could have had much more on the evening, having a puck sweep right past his blade with an empty net in front of him early in the game along with several other great chances. If this team is going to be successful playing the way that it currently is, he and Malkin are going to have to maintain this level of play.

Though Brent Johnson looked very pedestrian tonight, I am not holding him overly accountable. Sure, he didn’t make several saves that he had been making to this point in the season, but he didn’t have much support. Recchi’s opening goal came off of a rebound and several others came from odd man breaks. You can’t allow that many odd man breaks no matter who is net. You can also make the excuse that he was still dealing with the effects of the flu bug that has been going around the Pens room, though I am sure that Johnny wouldn’t want that to be used as a reason. He experienced a bit of what Marc Andre Fleury has been feeling in the Penguins net, only to a larger extent.

Matt Cooke is the only Penguins player to finish with a plus rating on the night… nine other players (Goligoski, Letang, Lovejoy, Dupuis, Letestu, Rupp, Asahm, Kennedy, and Crosby) went a combined minus-17. Not a great showing… Letestu, Dupuis, Goligoski, and Lovejoy managed to go a combined minus-11 themselves.

Tyler Kennedy led the game in shots with 8. Evgeni Malkin and Pascal Dupuis managed 7 each.

On the other side of the ice, I was very impressed with what I saw from Tyler Seguin. There is no doubt in my mind that this kid is going to be a star. He did some nice things, didn’t make mistakes and doesn’t look out of place playing with NHLers. He should have a long and fruitful career that will be sure to drive Maple Leaf fans crazy for years to come.

Nathan Horton is looking like one of the best acquisitions of the year. He picked up another 2 points (1G-1A) and had 3 shots on goal.

Mark Recchi not only scored his first goal of the season against his old team, but he also picked up two helpers. Funny how he always manages to find a way to burn the birds!

“At one point you have to call a spade a spade. We definitely weren’t competing at the level that we should. We certainly need to be better and at some point its unacceptable to compete like that. We talked about when we put our minds to it, like we did in Washington, we were down 3-0, we came back and tied it up in the third. There was no reason we couldn’t come back here. It was up to them to show that same kind of determination.”