Mike Therrien is in the house this evening. He has accepted a job scouting for the Minnesota Wild and was taking into tonight’s Penguins/Habs tilt… we were given a chance to catch up a bit during the first intermission… 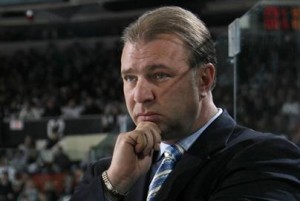 I have to admit, I have a very soft spot for Mike Therrien. Though he could be a bit of a… let’s be honest… hard ass, he was always a dream for me to deal with. He was the coach of the Pittsburgh Penguins when I started covering the team and though he was tough, he was always willing to answer any question thrown at him in a thoughtful way. He was easy to talk too, a regular guy, who told it like it was. I can’t say the same thing about every coach that I have dealt with in this league.

Therrien is here in his new role, pro scout for the Minnesota Wild. The team decided to have a quick scrum with the former coach so that everyone wouldn’t be asking for an interview when he was here to scout a game. I know this isn’t a popular sentiment with many Penguins fans, but he will be back in the NHL coaching before it is all said and done. Believe it or not, he is a good coach, especially with developing teams. Which is why he was so vital to the successes this franchise has had. He showed a group of kids how to come together and play a system. One that took them to a Stanley Cup Final.

Unfortunately his abrasive, demanding style became a bit much for the youngsters as they matured and grew into the players they are today, which is why Dan Bylsma was so great upon his arrival. He had a feel good vibe about him that was like day to Therrien’s night and it was a winning combination. It happens… sometimes the guy that was great for part of the trip just isn’t the guy that can get them over the hump. I think Mike understands that.

The former coach is very gracious, he loved the building and admitted that he still watches a ton of Penguins hockey games. He even admitted to being a bit torn last spring when the two teams he previously coached met in the Stanley Cup Playoffs.

I am not able to get this sound edited up, as I am perched on press row at the CONSOL Energy Center, but I wanted to get it out there for you to hear right away. As usual, when I got my chance to ask him a question, he gave me a very thoughtful answer… one of the longer of the scrum IMO. Just saying…