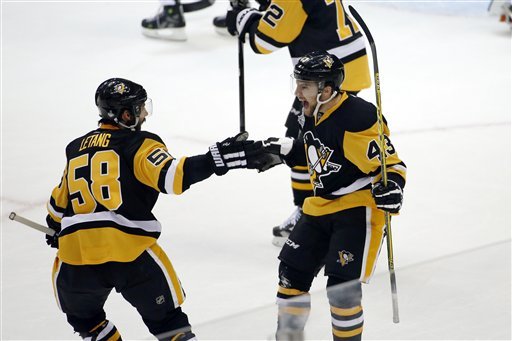 On Sept. 4, 2016, I took a long, hard look at Penguins forward Conor Sheary. I pointed to his production alongside Sidney Crosby during the Stanley Cup Playoffs as a sign that he could potentially thrive in that role moving forward, but I also spent time being a critical of the young winger.

My fear was that he simply wasn’t going to be able to finish enough to be a viable linemate for the Penguins’ captain. That assessment was drawn after seeing him put up only four goals in 23 games alongside Crosby en route to winning the Stanley Cup.

Sheary finished the postseason with four goals and six assists (10 points), and forced this question: Though he seemed to mesh with the Penguins’ captain, could the pairing work over the course of an 82-game regular season without a significant uptick in production?

The good news is that Sheary’s play quickly turned that question into an afterthought.

He picked up two goals and an assist during the Penguins 5-1 victory over the Boston Bruins on Sunday and has now scored nine goals in his last nine games. He is riding a current four-game scoring streak that has seen him collect nine points, was named the NHL’s No. 1 star for last week and seems to be getting better by the day.

His recent run has pushed his season totals to 17 goals and 17 assists (34 points) in 39 games. I don’t think many around the team predicted this kind of production from Sheary. Sure, 17 goals and 34 points might have been a good target for the season, but in fewer than forty games? Get out of town.

“I felt strongly that Conor could be a good player in this league,” Sullivan said. “He’s real elusive, he has great quickness to his game, he has a high hockey IQ and he’s brave. I’m not going to suggest I thought he’d have 17 goals halfway through the season but I knew he could play in this league and he could be a solid player at the NHL level.”

Sheary didn’t have much experience at the NHL level to base assessments on for this season, so I looked at his AHL statistics and they told a promising story.

He played 90 regular-season games for the Wilkes-Barre/Scranton Penguins over the past three seasons and rolled up 27 goals and 54 assists for 81 points. He posted 220 shots on goal and a plus-8 rating. He was better in the postseason, where he became a point-per-game player with 11 goals and 12 assists for 23 points in 23 playoff games. He produced 62 shots on goal (2.70 per game), an improvement on his 2.44 regular-season shots-per-game average.

He has essentially been the same player in the NHL. He’s averaging .43 goals, .43 assists and .87 points per game. He’s taking 2.43 shots per game, almost matching his regular-season SPG average in the AHL.

The question now becomes: Can he sustain it?

It’s possible. It appears that he is going to stick with Crosby, who’s rolling up 1.35 points per night. Sheary has shown an innate ability to find open space and Crosby is finding him with regularity.

Another topic that I hit on in September was the fact that Sheary had quite a bit in common with Martin St. Louis. The two are very similar in height and weight and they had very similar point totals through their first 60-plus NHL games.

St. Louis picked up 20 points in his first 63 NHL games, while Sheary picked up 20 in 67 combined regular-season and playoff games.

Based on that, it seemed to fair to think that Sheary could come close to reaching the totals that St. Louis posted during his first full season with the Tampa Bay Lightning. He scored 18 goals and 40 points in 78 games. Sheary is very close to surpassing those totals in roughly half of a season.

It is too early to assume that Sheary is going to match St. Louis’ NHL totals of 391 goals, 642 assists and 1,033 points in 1,134 games, but at this point he’s certainly proving all of the doubters wrong — including me.