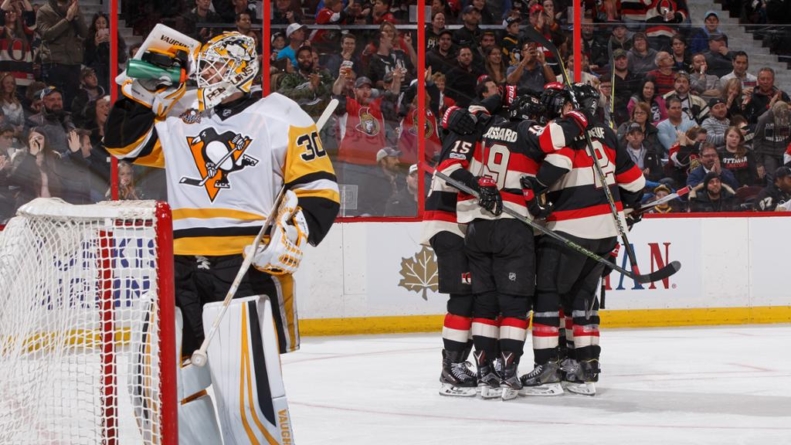 The Penguins entered the weekend riding the third best start in franchise history. That’s an impressive accomplishment for a team that has won four Stanley Cups and has been around for 50 years, but (isn’t there always a but) something just doesn’t look right with them at the moment.

They saw a five-game winning streak come to an end at the hands of the Washington Capitals on Wednesday and have gone on to drop three straight games. This marks their longest losing streak in over year. They haven’t dropped four straight since coach Mike Sullivan’s first four games behind the bench between Dec. 14-19, 2016.

This mini-streak has caused some hysteria among fans of the team and that will only grow if the Penguins fall to the Capitals again on Monday at PPG Paints Arena. It’s worth noting that the Capitals — 8-1-1 in their last 10 games — have won two of the three games between the clubs this season by a combined score of 14-6, so a loss isn’t out of the question.

So, what is wrong with the Penguins? Is it the residual effects of their bye week or their injuries, or is it something else completely?

Here are some facts that might answer the questions of what is going wrong right now.

The penalty kill is chief reason for the teams’ losing. They have allowed six power-play goals in their last four games, killing off just 11 of 17 attempts. They have dropped to 25th overall, with a kill rate of 78.2 percent.

The penalty kill isn’t a new problem. Aside from a stretch of 10 games between Dec. 12-31 that saw them kill 28 of 30 power plays, they have killed just 87 of 117 total. That 74.3 percent kill rate would rank them second-to-last in the league, just ahead of the Buffalo Sabres.

The Penguins penalty kill ranked fifth best in the league last season and many of the same faces from that unit are still on the roster. Matt Cullen, Eric Fehr, Nick Bonino, Carl Hagelin, Tom Kuhnhackl, Ian Cole, Kris Letang and Olli Maatta all ranked among the leaders in shorthanded ice time, so what’s missing? Maybe it was the impact of Ben Lovejoy.

Lovejoy, now on the New Jersey Devils, led the 2015-16 roster with an average of 2:32 minutes of shorthanded time per game. He was second on the team in shorthanded blocked shots (25) and brought a blue-collar approach on every shift.

If you’re looking for something that Jim Rutherford might target in the trade market, a penalty-killing specialist who would slot in on the bottom defensive pairing could be on the list. It wouldn’t be all that dissimilar to the move Ray Shero made in 2008 when he acquired Hal Gill to alleviate this same problem.

The Penguins have dealt with a number of injuries on their blue line. Their top three defenders have all missed time and that is tough to overcome.

Kris Letang, who leads the team in ice time averaging 25:11 per game, has missed six games. He was knocked out of action with another injury on Saturday night in Detroit and his status is unknown. Trevor Daley, averaging 20:44 per game, missed five games earlier this season and Brian Dumoulin, who logs 19:45 per game, has missed the last seven games with a broken jaw and won’t be back soon.

Those injuries have pressed Steven Oleksy (9 GP), Derrick Pouliot (7 GP), Chad Ruhwedel (5 GP), and David Warsofsky (5 GP) into action. All are regulars with the Penguins AHL affiliate in Wilkes-Barre/Scranton. That group is capable of offsetting short-term losses and making spot starts, but relying on them regularly can be tough.

Injuries are only part of the problem, as players like Olli Maatta and Daley have struggled at times this season.

The Penguins rank 15th with 176 minor penalties and have taken 29 in their last seven games. That is a lot of time to spend in the penalty box, especially for a team that is known to thrive during even-strength situations.

Spending that time in the penalty box breaks up the continuity of a game. It breaks up line combinations, expends a ton of energy and puts players at risk as they attempt to block shots.

That said, ranking among the middle of the pack isn’t a horrible thing, but what does leap off the page is that the Penguins are among the league leaders in so-called “penalties of laziness” — the kinds that come from not moving your feet and trying to use your stick to hold up an opposing player.

They are tied for seventh in the league with 27 hooking penalties and are fourth in tripping minors with 29. Those kind of penalties drive a coaching staff crazy, and can be avoided by outskating teams the way the Penguins did last season.

None of these issues are irreparable and the Penguins could bounce back as soon as this week, but they are, at the very least, cause for some introspection by the team.

Sullivan thinks that simply seeing his team put the focus back on outplaying and not outscoring teams could repair most of their problems. He had that same message for this group last season and it eventually set in.

Can it happen again? My guess is yes, but there is no doubt that general manager Jim Rutherford is formulating a personnel plan for the rest of the season. The trade deadline is roughly six weeks away and there is no reason to think that significant changes are needed, but tweaks could come well before March 1.