Regardless of what folks are saying around the league, I am still pretty excited about this head coach… enjoy the clip. 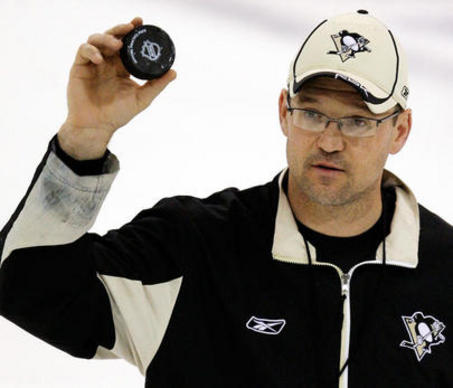 I will have three more audio links from this afternoon going up, but I figured that I would start with Dan Bylsma, since he kept us waiting the longest!

The Coach was actually pretty busy this afternoon dealing with player meetings etc and apparently one of the meetings ran a bit long. Us poor shlubs were left waiting in the media lounge for roughly an hour waiting for him. He was quick to apologize though… Dan is always a great guy to deal with and it was well worth the wait. 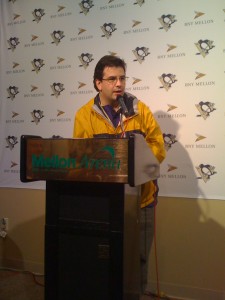 One funny moment occurred when Rob Rossi jumped to the podium and began conducting his own presser for the slap happy group that decided to hang around. I know that many out there are always very fond of Double R, but he actually is one of the funniest guys in the building when he isn’t being a curmudgeon!

When Coach finally arrived in the room, he was quick to apologize for being an hour late. He then had some fun when he was asked if he was attacked by the Monkey that was seen behind the Penguins bench. Apparently there was a Canadiens’ fan with a plush monkey puppet tormenting the team throughout Game 7.

There weren’t any groundbreaking moments in the presser, but you can hear the disappointment in Bylsma’s voice over the loss. He addresses the fact that he could be losing some of his vets, he will probably avoid watching the playoffs…but would flip it on out of habit. He also addressed the Sergei Gonchar situation and talked as if he was very much in favor of bringing him back.

Interestingly enough, he agreed with a question asking if Geno Malkin and Marc Andre Fleury should feel a little disappointed about their seasons. He didn’t do it in a way to beat his stars up, but pointed out that each of them probably had moments during this season and these playoffs that they would like to have back.

Overall, I found his comments pretty interesting… he even called himself out by saying that even when he does something that is praised in the media, he wonders if it was the right move.

Regardless of what folks are saying around the league, I am still pretty excited about this head coach… enjoy the clip. It is the raw cut from my recorder…didn’t have a ton of time to get it edited up… 17 minutes worth…