Dan Scifo gives us five thoughts on the young season… do you agree with his assessments? Either way, let us hear your five thoughts!

Despite not playing anywhere near their best hockey, the Penguins still found a way to 5-4-1, good for the top spot in the Atlantic Division and 3rd in the Eastern Conference entering Friday’s action. Barring a complete collapse, the Penguins will be one of the eight teams to represent the Eastern Conference in the Stanley Cup playoffs. They’re too good to miss. This team has the potential to be pretty scary once it gets on a roll. No need to hit the panic button just yet.

With that said, Sidney Crosby can’t do it all. The Penguin captain needs help if this team is going to get to where it wants to go. Evgeni Malkin has eight points, but three even strength goals in 10 games doesn’t cut it for a player of his caliber. It’s no coincidence that the Penguins won four straight games when the two combined for 18 points from Oct. 13 to Oct. 21. Malkin will come around when it’s all said and done. Hopefully his teammates can do the same. 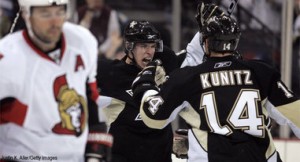 Secondary scoring is absolutely critical to the Penguins success this year. Players like Chris Kunitz, Matt Cooke, Pascal Dupuis, Tyler Kennedy, Max Talbot and newcomer Mike Comrie need to produce and take the scoring burden off Crosby and Malkin. The impending return of Jordan Staal should provide an immediate boost as the 22-year-old is already considered one of the top defensive forwards in the league. But it would be nice to see Staal provide a more potent goal-scoring punch, similar to his rookie season when he scored 29 times. Somewhere between 25 and 30 goals should suffice. Mark Letestu has been a pleasant early-season surprise, leading all rookies in goals, power-play goals, and points, but the onus is on the aforementioned veterans to produce. Not sure if it’s a concern or a bright spot right now, but defenseman make up three of the Penguins’ top six scorers.

The Penguins defensive core has the potential to become one of the best units – offensively and defensively – in the National Hockey League. Kris Letang, Alex Goligoski, and free-agent pickup Paul Martin have already combined for 23 points and all three rank in the top 10 in points among NHL defensemen. Brooks Orpik and newly-acquired Zbynek Michalek could make an impressive shut down pairing as Michalek led the Coyotes with 156 blocked shots, while Orpik ranked sixth in the NHL with 255 hits last season. There’s a reason why the Penguins spent $10 million in the offseason to upgrade their defense. Keep an eye on this unit. 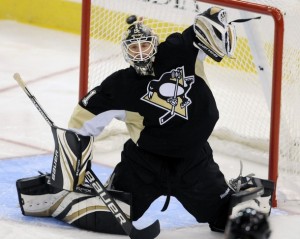 The Penguins will not win a Stanley Cup with Brent Johnson in goal. Johnson has enjoyed a fantastic start to the season with an unbeaten 4-0-1 mark, a 1.39 goals-against average, and a sizzling .951 save percentage. But the Penguins are going to need their franchise goaltender Marc-Andre Fleury to come around if they want to win a second Stanley Cup in three years. There’s still plenty of time left in the season and no reason to think he won’t break out of his early-season slump. Fleury has taken the Penguins to the Stanley Cup Finals twice and recorded 35 wins or more three times in six seasons. A revamped defense should help him get the Penguins to where they need to be.

There are 72 games left in the regular season. A lot will change between now and Game 82 on Sunday, April 10 at Atlanta. But February and March is when the Penguins need to begin to peak. That’s when this team has to play its best hockey. Until then, the Penguins are in good position as long as they’re one of the top eight in the Eastern Conference.