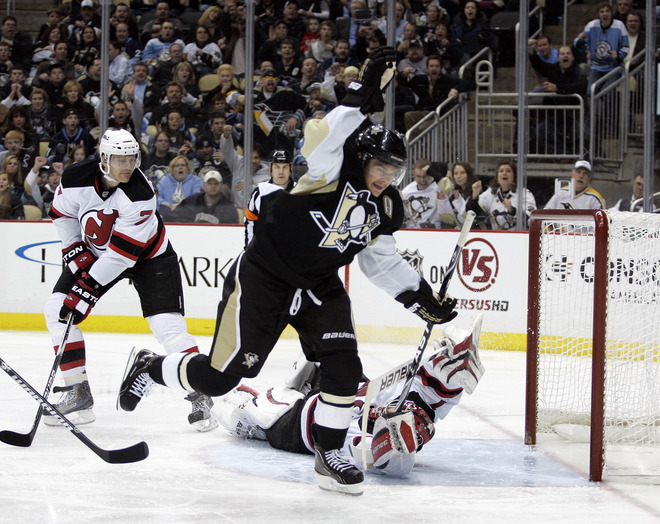 Well, the first regular season in the history of the Consol Energy Center is in the books and the Birds finish it off with a victory. A number of fans went home happy with the jerseys off of the backs of their favorite players and one left with a car. I’d say that all of that signals a fairly successful fan appreciation night!

Before we get to this evening’s five things, we got an update on Dustin Jeffrey. Unfortunately his season is officially over. Coach Dan Bylsma had an update for us at the start of his post game presser and it wasn’t great news for the rookie.

Jeffrey underwent a procedure this morning to repair his ACL. Though all went well with his repair, he will miss at least six-months rehabbing the injury. Damn shame for a kid that has gone out of his way to reinvent himself over the past couple of seasons. He has really turned into part of the future here and should (barring setbacks with the knee) be penciled in for a NHL job to start next season.

With that, let’s get going on tonight’s “Five Things…”

Special teams – The Penguins won the special teams battle and it was key to their victory this evening. Though they only scored on one of three power plays in the game, they opened the scoring on a great individual effort by Jordan Staal while on the advantage. Utilizing your power play to score first in the playoffs is very important, especially because things really tighten up five-on-five. The Birds also found a way to kill off both of New Jersey’s opportunities… I would say that going 1-0 in that category is going to win games for you more times than not.

The Talbot, Conner, Dupuis Line – this trio has been the Penguins best over the past couple of weeks. That aren’t what you would call a shutdown trio by any means, as they tend to outskate the opposition more than beat them up and skate is what they did tonight. The Penguins third line combined to produce 3-pts (2G-1A), a plus-4 rating, and 7-shots on goal. That is pretty nice production from a group that is more than often looked at to play solid two-way hockey. Bylsma couldn’t say enough about them in his post game comments and it isn’t the first time.  ** On a side note… isn’t it amazing to see what the right linemates can do for a guy? Most were ready to run Max Talbot out of town a few weeks ago. 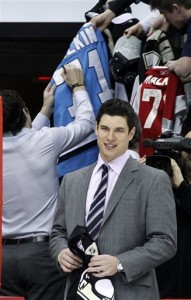 Johan Hedberg – You can’t say enough about what the “Moose” has done for the New Jersey Devils this season. He has found a way to fill in amazingly well for Martin Brodeur, especially when the Devils weren’t playing very good hockey. Unfortunately for the former Penguins’ goaltender, this wasn’t one of his best nights between the pipes. He faced 27-shots on goal and allowed four goals. Though he made some big stops to give his team a chance during the first and second periods, he seemed to be going down a bit too quickly when guys got in and around his crease. His making the first move cost him on Staal’s opening goal and Chris Kunitz’s third goal. I realize that many a goalie would have allowed the Kunitz goal, but Hedberg didn’t give himself a chance. If he manages to make a save there his team ties the game on Rolston’s goal three minutes later.

Fan Appreciation Night – There is something to be said for winning one for the fans, especially on this night each season – the final home game of the year. Since the team began the “Shirts Off of Our Backs” Fan Appreciation Night to close the final game of the 2004-05 season (yep, that year began with Camp Edzo and ended with Eddie O giving an emotional speech from the ice… it also was the final NHL anything we say in Pittsburgh before the lockout) they have gone a perfect 6-0-0. Marc Andre Fleury has been great in all of those games and the team has knocked off the likes of the Islanders (3-times), the Rangers, Flyers and Capitals. Winning the game is the perfect way to get the players and the fans in the mood to go through the ceremony to end the night. It is as if the tradition calls for a win and that is what the team did tonight.

The Carrot – the Penguins are saying and doing all of the right things in regard to the top spot in the Eastern Conference and the Atlantic Division crown. “It really isn’t that important”… “They just want to play their game” and so on… however, you can’t help but think that they know that they are still in striking distance, especially when you watch Philadelphia and Washington drop games in the standings. Though the Birds could be content to wallow through the final week of the season and settle for their first round match-up with the Tampa Bay Lightning, they seem to be ready to make a run at the latter two teams. The NHL schedule maker has given them a great opportunity to take care of their own business with closing games against the New York Islanders and Atlanta Thrashers… will they go all “Jordan Chase” and TAKE IT! Time will tell…  (The Caps, Flyers and Penguins each have two games remaining… their respective point totals: 105, 103, and 102)

Notes: Sidney Crosby joined the rest of the injured Penguins on the ice for the “SOOTB” ceremony… Chris Kunitz led all Penguins with 4-shots on goal… Mike Rupp was a very healthy 67% in the face-off circle for the Birds… Brian Rolston led the Devils with 5-shots on goal.