Ryan Malone, Vincent Lecavalier and others to get sheared this evening for a great cause…

Folks in Pittsburgh will never forget Ryan Malone. Not only is he one of the most successful hockey players to ever come out of our humble little town, but he did it the hard way. It wasn’t always nice contracts and first line assignments for the one they call “Bugsy.”

The Upper St. Claire native wasn’t a first round draft pick. In fact, he wasn’t selected until the fourth round by his home town Penguins with the 115th overall selection. That selection didn’t seem to guarantee him much aside from the prestige of being selected.

From there he was off to St. Cloud State, where he played for four seasons and started to mold the game that would eventually make him successful at the NHL level. After finishing his senior season, Malone inked an entry level deal with the Penguins. It is worth noting that that deal came with no guarantees – there was much work ahead.

During his first camp with the team following his signing he began to “wow” the Penguins faithful, but more importantly he began to wow team management. The “Pittsburgh Kid” started to show that he belonged and made the team out of camp. Not only did he make the team that season, but he finished third in team scoring.

Though Malone had his share of ups and downs over the next couple of seasons, he became one of the most important players on the roster. He transformed himself into a power forward type who wasn’t afraid to go to the front of the net, to score the dirty goal, to defend a teammate and to put his body on the line for the team. Something he did during their run to Stanley Cup Finals in 2008 on more than one occasion – most memorably taking a puck off of the face and returning later in the game to help the Penguins win an epic three-overtime Game five in Detroit.

All of the above made Malone a hot commodity and a household name in the league that some might not have imagined that he would ever even play in. He has gone on to be a highly sought after unrestricted free agent, to sign a dream contract with the Tampa Bay Lightning, and to represent his country during the 2010 Olympics. Not to shabby for a kid from Pittsburgh…

He proved the naysayers wrong through sheer will, sheer determination, sheer effort and sheer hard work. 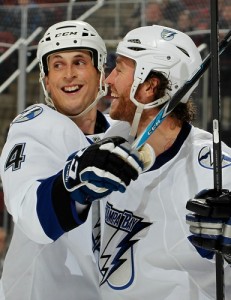 Tonight… he will be sheared.

Malone will lose his locks as part of “Tampa Bay’s Cut For A Cure.”

You may remember me mentioning the event a few weeks ago… if not, we figured we would bring you the info again. Malone is joining Vincent Lecavalier, Marty St. Louis and several other teammates and local Tampa celebrities to raise money to be donated to the Pediatric Cancer Foundation and the Vincent Lecavalier Pediatric Cancer & Blood Disorders Center at All Children’s Hospital.

Though the event is this evening, it isn’t too late to donate… why not take a moment or two to throw a couple of dollars behind an amazing cause. Of course we are asking that you choose to sponsor Pittsburgh’s own Ryan Malone!

We will be bringing you photos and maybe even videos following the event. Thank you all for the support.