It has been a while… I know… Finally, the JUST SAYING, has come back to From the Point! Today has been one of the most hectic days I have had in a while. It started with the first snowfall of the season, which made the morning commute a pain in the backside. Then continued with a sea of voicemail and “day job” responsibilities. From there it was on to my weekly fantasy hockey blog for Versus.com and a number of email exchanges with folks representing former Heisman Trophy winners. (Also for the Versus Network)

Before I even realized it the clock at hit 3:00pm and I still had a good bit to do — such as this blog –before getting out of here at 5:00pm to meet some friends from the hockey community for dinner. Then it dawned on me, the hectic atmosphere of the day was a tool. God, the fates, or who/whatever you believe in made my day crazy so that I wouldn’t dwell on the fact that three years ago today I lost my dad.

I actually had to take a moment to sit back and think about it… it had actually been three years! Three years since our reconciliation, his battle with cancer and everything else that surrounded one of the toughest times that I have ever had. For as bad as all of that was, I am still thankful to this day for the time that we got to spend together and the relationship that we were able to rebuild.

With that in mind, I will spare you all another reading of “A Gift From My Father” and just post a scene from one of his favorite movies… Stripes. My dad and his buddies used to act this scene out during the big Fourth of July parties that my family used to have back in the early 80’s. Some very great times were had by all and I will never forget them. Following the scene is another edition of Just Saying… probably only the second one that I have done here at From the Point… SHAME ON ME…

Hang in there Fath! I miss ya!

Without further adieu, let’s just right into another edition of “Just Saying…”

…that Sidney Crosby, his 13 game point scoring streak, and his 26 November points (12G-14A) have been named the NHL’s number one star for the month of November. The point scoring streak is the longest in the league this season and the third-longest of his career. All of this has also helped the Penguins into a first place tie with the Philadelphia Flyers in the Atlantic Division and Crosby into the league’s lead in scoring.

…that, hey… just like Stamkos, this Crosby kid is on a TORRID pace… just saying…

… that Crosby pretty much can’t win. Though the play against Ryan Callahan on Monday night was definitely border line, it doesn’t make him a dirty player. He did slew foot Cally, but it was more the product of his trying to spin off of a player that was sort of riding him up the ice. There were times in the past where Crosby would have fallen there and he would have been labeled a diver…

…that Pascal Dupuis and Chris Kunitz have been amazing on Crosby’s wings. Both have been tenacious in the corners, have been great at opening space up for Crosby and they know how to read and react off of a great player. All of it is turning into production for the entire unit. They are also firing shots like there is no tomorrow which is creating a ton of opportunities around the crease. 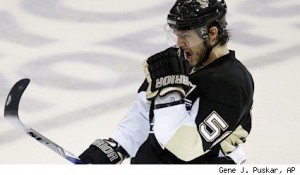 …that Penguins’ fans have done almost as good a job of voting for Kris Letang as the young defenseman has done for the Penguins. He is having a career season and has done an amazing job of stepping into the GIGANTIC shoes left behind by Sergei Gonchar. Letang and his 23 points (5G-18A) in 26 games will end up in the All-Star game thanks to you all righting the wrong of the league’s ballot makers.

…that I am still a huge Mark Letestu fan, but he is starting to look a bit more like the odd man out upon Jordan Staal’s return.

…that the thought of Jordan Staal returning to this line-up and the league’s number one penalty kill has got to be sending shivers up the spines of the rest of the league – especially those teams in the Atlantic Division who will have to face that unit most often.

…that if Ben Lovejoy didn’t have to clear waivers he would have been sent back down to Wilkes Barre-Scranton. He just can’t get over the hump and seemingly makes two bad plays on the puck for every good one.

…that Geno Machino will be just fine. He is leading the league in shots on goal and is starting to get his gallop back. That is turning into even more opportunities for him and his linemates. Being reunited with Max Talbot will only help the cause… Just saying…

…that the Flower has clearly gotten his “bloom” back. Wow, what a November that kid has had… and it is great to see the smile back in the room again, as it was absent for far too long.

…that if you aren’t watching the Walking Dead, you should be – it is badass! No other way to describe it. The zombies are the best I have ever seen in a television show or film – aside from MJ’s Thriller – and it keeps you on the edge of your seat. Though it isn’t for the squeamish based on the gore, it is still one of the best shows on television right now.

…that I can’t talk about the best shows on television without talking about Sons of Anarchy, which by far is my favorite show. Season three just ended last night with a bang, which gives you plenty of time to catch up on the entire series if you have missed it. I would advise you going all the way back to the beginning so that last night’s finale isn’t lost on you.

…that Mike Comrie might give you a bit more bang for your $500,000 had he gotten a longer look on one of the top two lines. It is chronic Miro Satan syndrome all over again… guys like that are always going to look one thousand times worse when they are playing out of their element on the third and fourth line.

…that I will shoot my own point down by telling you that Comrie was a pretty effective third line player during stops in Philadelphia, New York and Ottawa… rats…

…that playing for the Ruthless Interlopers clearly works for Nicklas Backstrom. The talented Swede was having his usual fine season, but he had one of his biggest weeks of the year upon being traded to my fantasy team last week! You’re welcome Nick!

…that it is always interesting to see how life gives you a chance to get a “do over” on big decisions. Over the last 13 years I have made two huge professional decisions and several months after each I had a chance to reverse them. The first time, I answered “Mr. Destiny’s” call and accepted the “do over” thus putting myself in position for a life changing event that would alter my course forever. The second time popped up just two weeks ago…this time I chose to stay on course and told “Mr. Destiny” to hit the bricks…

…that I have been a huge fan of Mattias Tedenby since his draft year and it is great to see him become one of the bright spots in an otherwise dark, dark season in Newark.

…that Kevin Shattenkirk is looking like a kid that will be able to place amongst the top 10 defensive scorers in the league year after year. Though we are dealing with a small sample size, he has seized his opportunity and it will be awfully tough to send him back to the A at this point.

…that you should grab Corey Crawford and Johan Hedberg right now if you need help for your fantasy teams in goal, as they are and will probably continue to be the ones giving their teams the best chance at victory moving forward.

…that if you are free the next several afternoons, you should join me and a host of legendary former Heisman Trophy winner for a series of live chats over at Versus.com. I will be hosting and fielding your questions for the guys starting with the NCAA’s all-time leading rusher, Ron Dayne tomorrow at 3:00pm EST.

…that Phoenix Coyotes and St. Louis Blues fans should give me a break when it comes to their placement in my weekly power rankings. Though you are getting there, neither of your teams is top ten in the league just yet. Also, TSN has had each of you lower than me in each of the past two weeks… just saying!

…that I absolutely love the Big Four Concert Idea and am giddy as a pig in feces about the fact that they might be bringing it to the USA!

…that the Penguins will be teaming up with the United States Marine Corps for their annual toy drive. Anyone who brings a new, unopened toy to the Penguins game on December 6th or December 8th will be entered in a drawing for the chance to win autographed Penguins merch.

…that you all had as much fun reading this as I did writing it… as always, thanks for humoring me!