Evgeni Malkin will undergo season ending surgery on his right knee tomorrow to repair his torn ACL and MCL. 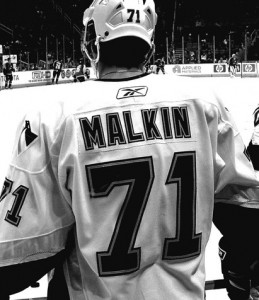 The Penguins announced the inevitable this afternoon — Evgeni Malkin will undergo surgery to repair his right MCL and ACL on Thursday. The team had been waiting for the swelling to go down and for things “to calm down a bit” within the knee before making an official decision on which course of action to pursue.

The surgery will put Malkin out of action for six months, but he is expected to be ready to return to the team in time for training camp next fall.

Malkin, who was injured Friday evening in a collision with Buffalo defenseman Tyler Myers, sent a text message to general manager Ray Shero following the injury that read simply, “I’m sorry.” A sign that the Russian superstar might be taking the injury a bit hard.

The 2009 Art Ross and Conn Smythe Trophy winner was not exactly lighting the world on fire this season, having notched just 15 goals and 22 assists for 37 points in 43 games this season.

The season ending knee injury was just the latest set back for the two-time Hart Trophy finalist. Malkin had been dealing with a nagging left knee problem and a sinus infection. If you were looking for a silver lining in the injury, it is that Malkin can get both knees right for the first time since 2009.