Matt Cooke will be suspended for four games due to his hit to the back of the Blue Jackets’ Fedor Tyutin. 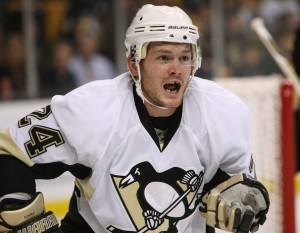 Well, the news you have all been waiting for has just become public. Penguins’ forward Matt Cooke has been suspended four games for his latest indiscretion — a hit to the back of Fedor Tyutin last night during the Penguins’ 4-1 loss to the Blue Jackets.

The penalty is more than fair considering that the Cooke has a long and storied history of making plays that lack judgment. Last night was just the latest example and the league all but had to take action, especially since the hit happened one game after what looked to be a knee-on-knee collision with Alex Ovechkin.

Luckily neither Ovechkin nor Tyutin was injured by Cooke’s actions, but the league risked letting another questionable action fall into ancient history. Had they not suspended Cooke now, this hit wouldn’t have been applicable when they review future incidents.

Sure, they would have these incidents in mind, but without a suspension history, there might as well not be an action. This suspension lays the groundwork for a longer one down the line when the next incident occurs… and history shows us that it will in fact occur.

Cooke has been a bit of a loose cannon lately and has taken plenty of liberties over the past three or four games. This will give him a great opportunity to calm down a bit, though this suspension will hurt the team much more than it ever would have under normal circumstances.

The Penguins have already been playing more than a little shorthanded and this will take another NHL caliber body out of their line-up for four games. Hopefully this will serve as a wake up call to Cooke, who is one of the league’s best agitators when playing on the right side of the edge. Unfortunately he has spent far to often on the wrong side of that edge lately.

What do you think of the suspension? Personally, I feel that it is just. The hit last night was a clear infraction of the rules and there was no need for it.

For what it is worth, I also agree with the suspension to Anton Volchenkov, who is actually lucky to come away with only three games.