The Penguins knocked off the Florida Panthers 5-2. Flew out at 11:00pm for the first of two clashes with the Capitals over the next nine days… 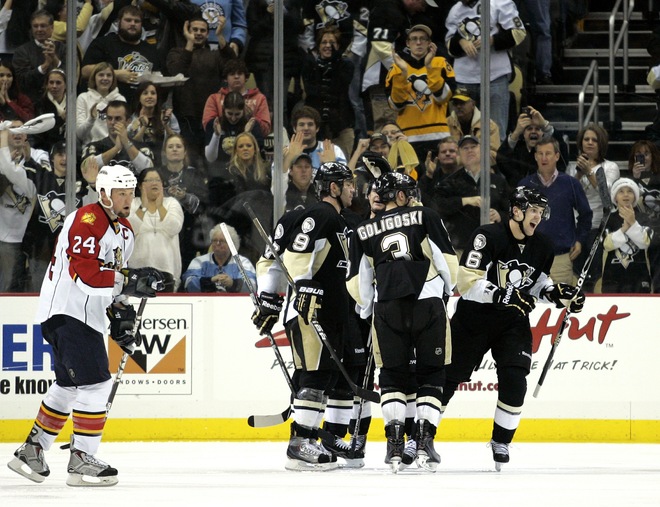 I am late in getting back to the press box following the post game scrums, so in lieu of a full game story, I will just run through some thoughts, observations and quotes…

Brent Johnson played another good game, though it didn’t look like he was going to have a great night when things got going. He allowed a very suspect goal moments after the Penguins had taken a 1-0 lead, but recovered nicely. Dan Bylsma admitted openly that he did suffer a groin injury, but sort of speculated that the groin might have been a bit tender before tonight’s game and it was activated. A call up is forthcoming, no word on if it will be Brad Theissien or John Curry.

Speaking of injuries, Arron Asham suffered a lower body injury and didn’t play in the third period. Bylsma called him questionable for tomorrow in Washington. I can’t see them rushing him back into the line-up when Godard could capably fill in on the right wing of the fourth line.

Ben Lovejoy looked a bit worse for wear after taking a puck to the face late in the third period, but he was in great spirits and according to Bylsma “has no structural damage” to his face. Lovejoy was a bit wide-eyed when he saw all of the media folk waiting to talk to him, but he held his own…

I was late to the scrum, but our friend Shawn Mccullough sent us the raw sound…

“I wish I could claim smarts on that one (knowing Lovejoy would be going for a Howe hatty), but Ben Lovejoy has been in the position where he has played some really good hockey. He’s helped our team when he’s been in there, but hasn’t had a great opportunity to do that. The turning point for Ben was last season against Florida. He played there and almost scored his first NHL goal. The puck was in the air and he was right at the goal line, and he’s still dreaming about it today. It’s fitting that he gets in, plays really well, gets in a fight, does well and gets the goal.” 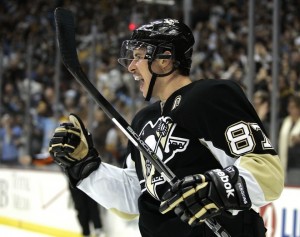 Sidney Crosby extended his scoring streak to 22 games with a goal… I could have sworn that he had an assist earlier in the game as well, but it has since been changed. His goal came off of a very pretty play by Brent Johnson and Chris Kunitz, who combined to chip the puck up the boards and past several Florida defenders springing Crosby into the zone. He came down the left wing and fired a slapper past Tomas Vokoun. Crosby also had 8 shots on goal and finished the game winning 58% of his face-offs.

Crosby talked about his not being thrilled with the 60 minute effort tonight, but that they were happy with the win. Also talked about getting better for tomorrow evening so that they can get a big one heading into the break…

Evgeni Malkin was again galloping all over the ice and picked up a huge assist on Matt Cooke’s goal. He worked his tail off coming down the left wing, put a shot on goal that Vokoun was able to save. Dennis Wideman gathered the rebound and circled around behind his own net, Malkin stayed with him and picked his pocket. Malkin got the puck to to the net where Max Talbot had a whack at it, and Cooke finished the play when Vokoun gave up another big rebound.

The Team was pretty anxious about tomorrow night’s game… well I should say the media folk were all pretty eager to ask about it. There were a ton of questions asked about tomorrow evening’s game in our Nation’s Capitol and most of the answers showed a pretty excited group. There were a lot of “this is a rivalry game,” “We are anxious to play those guys because it is always a great environment and a big game.”

Though the Penguins seemed to loose some focus as this game went on, they were certainly on point throughout the first period and it set them up to win this one pretty easily. The team was scheduled to fly out tonight at 11:00pm, thus making them rush through their post game routine.

Marc Andre Fleury did allow one goal, but he turned in a pretty solid period of work for coming in cold. He also took advantage of the fact that his team had a two goal lead late and tried to take a shot at the empty net. Unfortunately for him, he didn’t get it and it actually went as an icing call. Bylsma was asked if Marc has an automatic green light to take that shot if the team is up by two.

He chuckled, looked down and said… “Well, we can’t ice the puck in that situation. We definitely didn’t want to ice the puck, but as I saw him go for it, I have to admit that I was hoping it was going to make a right turn in for him, more than I was worried about that ice.”

The Penguins finished the game with 10 turnovers… Most of which came in the second and third period. The team really struggled to get the puck out of their own zone at times as the game rolled on, but it didn’t cost them. That is something that they cannot do tomorrow night…  they were outshooting the Panthers by a wide margin at one point, but were actually outshot because of their inability to clear the zone at times during this game.

Mark Letestu scored another big goal tonight to kick things off for the Pens. His showed some great patience coming down the right wing and out-waiting Vokoun. His comments post game were pretty comical, as he mentioned that “the book on Vokoun” and some of his tendencies. The follow up asks if he was disappointed by the fact that he was pulled since he “had the book on him.”

The penalty kill had another good game, as they held the Panthers off of the board on three occasions. Unfortunately the Penguins power play didn’t get it done for them tonight though, as they were held scoreless in four attempts. The penalty killing is going to be a key to the game tomorrow night… I am sure that the power play will be as well. The team that wins the special teams battle will likely take the W.

“I was that we would have played our game. They are a great team and obviously Crosby is a great player. I am disappointed that we didn’t give them more of a game.”

Overall, another big win in the books for the Penguins… we’ll be back with plenty more tomorrow…