The Penguins, led by Brent Johnson and Mark Letestu, knock off the Ottawa Senators, picking up their third win in a row and fourth in five games. (audio throughout) 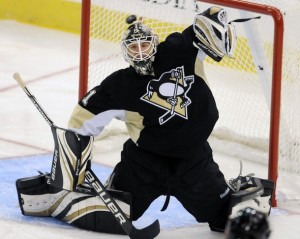 Brent Johnson came into this season as the clear cut back-up to Marc Andre Fleury and expected to play 20-25 games throughout the season. In fact, that was his high end amount, as he had been around the organization long enough to realize that Fleury could be a bit of a work horse.

Well, 7 games into the season and it is Johnson who has been the Penguins work horse. The well traveled veteran back stop has been the go to guy for head coach Dan Bylsma after a sluggish start for Fleury and he is running with the opportunity. Albeit in the most humble way possible.

“I’m very happy that I get a chance to play,” Johnson said after his 5-2 victory over the Ottawa Senators. “I told everyone before, this is Flower’s team and everyone knows that.”

“I’m just doing whatever coach wants me to do and if I get a chance I want to help the guys win.”

Johnson’s words don’t ring hollow either; when he speaks there is a legitimacy to what he is saying. You can tell that he means it when he says that it is “Flower’s team.” Nothing hammered the point home more than when he was asked if he is starting to expect to be in the net for the next game.

“I don’t expect anything,” Johnson said. “Honestly, we find out maybe the night before and that’s it. I’m always looking forward to practicing hard and seeing what happens.”

Johnson, who has been the prototypical back-up over his years in the league, has been just that for the Penguins. You need a guy like him to be successful. A back-up goaltender has got to be there during the rough patches. He has got to be able to come in at a moment’s notice and play meaningful hockey until the starter is ready to get back in there.

“Marc Andre Fleury is our franchise goalie and he’s our number 1 guy and he’s the guy we count on to be a great goaltender for us and make big saves like he has in the past,” head coach Dan Bylsma said about walking the line between a veteran back-up and a franchise goalie. “He’ll get to do that again, get back in there. His teammates are confident in what he brings to our team.”

Though the situation hasn’t been a great one for Fleury, as he has now sat on the bench for 3 games in a row, all parties are saying and doing the right things. You also can’t help but feel excited for Brent Johnson’s successes as he is one of the likeable guys in the game.

Make no mistake, when Fleury is backstopping this team to big points in February, March and April, we will all be thankful for Johnny’s contributions as these points will be huge ones in solidifying position in the standings.

Anyone who reads this blog or listens to my hits on XM Home Ice realizes that I have long carrying the Mark Letestu flag. The kid looked like he was ready for prime time last season, but the numbers just didn’t allow him to break into the line-up consistently. Well, that all changed this year as some injuries sprang up and he had the training camp of his life.

Letestu again had himself a big night against the Ottawa Senators and, though it is early, has thrown his hat in the ring for rookie of the year consideration. He scored a pretty power play goal off of a Mike Comrie feed, firing a shot into the top right corner over Brian Elliott’s shoulder. Came within an eyelash of notching a second one on the opposite side later in the game and picked up another assist. He now shares the Penguins’ goal scoring lead with Sidney Crosby and looks to have a strangle hold on a roster sport even when everyone gets healthy.

The youngster joked in the room that he is starting to believe that it is all real and that he can keep this going based on the fact that he has done it for 7 games now… his coach agrees.

“He is getting rewarded on the score sheet. He’s getting opportunities to play in situations to put up points, and he has done that. In tonight’s game he did it with a shot, in the previous game he did it with a puck battle in front of the net. On top of that he’s responsible in other areas of the game that allow him to be a reliable guy. He is probably right. When you can do it for seven games, you can probably keep doing it for another nine. He gets up there and gets that chance again He has done a great job – it was a big goal and a big shot. He has done it repeatedly for us – he just didn’t get the winner tonight.”

Alex Goligoski played his best game of the season. Yes, I realize that he was off to an impressive offensive start, but he played a complete game. One in which he made solid, smart plays with the puck. Took each and every shot that was available to him and made those around him better, he also continued his scoring streak – one that stretches the length the schedule thus far.

Mike Comrie has now notched 3 assists in his last two games. He also played a bit tougher in traffic and didn’t get knocked off of the puck easily. He could be settling in and that is a good thing for the Penguins. When he is playing well, as he did in several of their pre-season games, he was an offensive threat each time he hopped the boards.

The Penguins Power Play has finally started to find its groove. The units are looking cohesive, moving the puck with crisp tape to tape passes and best of all – scoring some goals. They have now scored 5 power play goals in their last 3 games, including 4 in their last two.