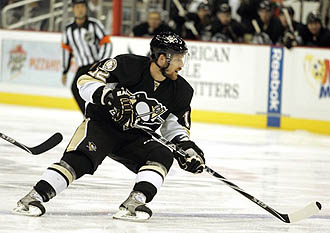 As reported here yesterday, the Penguins have indeed re-assigned Brett Sterling to their AHL affiliate in Wilkes Barre-Scranton. The move, not unlike my talk of the move yesterday, as set off a firestorm amongst Penguins’ fans. Most can’t see the point of re-assigning a player that they deem productive when the team is struggling to score goals.

Unfortunately for Sterling, he was deemed expendable by the Penguins recent acquisitions of James Neal and Alexei Kovalev. The numbers also worked against him in that a number of Penguins are on the mend and should be returning to the line-up soon.

He isn’t a player that can be effective playing in a third or fourth line role and the squad didn’t really have an opening on the top two lines for him. The fact that he is essentially a one dimensional guy has him on his way back to the A.

The Pittsburgh Penguins have re-assigned forward Brett Sterling to Wilkes-Barre/Scranton of the American Hockey League, it was announced by executive vice president and general manager Ray Shero.

Sterling has appeared in seven games for Pittsburgh this season, recording three goals and five points.