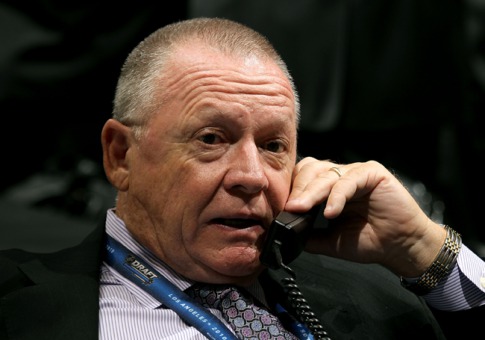 One thing about Jim Rutherford’s tenure in Pittsburgh thus far is that he has been pretty forthright with information and isn’t shy about telling the media exactly what he was thinking in a given situation. That was again the situation today as he talked openly about his draft and how the selections were made.

Rutherford talked about being excited to have drafted Sami Kapanen and now his son Kasperi, but did he consult the latter before making the pick?

“A little bit over the course of the year,” said Rutherford. “We had a good background check on him (laughs). We were surprised he was still there at 22. We rated him a lot higher.”

Management/Ownership wasn’t shy about their disappointment with recent drafts under the previous regime here in Pittsburgh and there was a strong focus placed on selecting forwards in this draft. The Penguins ended up utilizing four of their five picks on forwards.

“We were weighing heavily on forwards,” said Rutherford. “So we got forwards. We have a lot of young defensemen. We’re pleased with the way it went.”

Rutherford spent some time talking about his new coach as well, something that hasn’t happened much since they announced the hiring of Mike Johnston last week. Of course the hiring has been met with a smattering of criticism, specifically aimed at the fact that Johnston has come from a Junior A program in the Western Hockey League – the Portland Winterhawks.

“I really like him,” said Rutherford. “Really impressed with the guy. Very bright, very articulate, very well prepared and a really good communicator. With the group we have, I felt really strong about the job he’ll do.”

He went on to address that talk about Johnston being a Junior A coach.

“People talk about him coming from junior hockey, that’s where he was, but at the same time, he was in the league for 8 or 9 years as an associate coach and a lot of coaching in international hockey. He has great experience.”

Rutherford is still getting his legs under him in Pittsburgh and getting to know his new staff and how they’ll all fit together over the coming weeks/years. He joked that for as long as he’s been around, he isn’t all that familiar with his new direct reports.

“It’s funny because as long as I’ve been around the league I know a lot of people but I know the people in the Penguins organization the least,” said Rutherford. “This was a good weekend for me. Watching how they work I’m real comfortable with what I’ve seen this weekend.”

That has to have made a few individuals exhale a bit since there was a good bit of speculation that change could be coming to the scouting staff following this draft. It just wouldn’t have made sense to make changes there until after this weekend since they had done the bulk of the prep work on this class.

Rutherford talked about the fact that the Penguins drafting philosophy is terms of how they generate their list is a bit different than he was used to, but he has gained a better understanding for how they go about their business this weekend.

While folks are still seemingly raising their eyebrows a bit about the Rutherford hiring in Pittsburgh, he has jumped in feet first this weekend and looks like he’ll be a pretty busy guy when unrestricted free agency kicks off this Tuesday.

Once again Rutherford was pretty forthright and explained that he hopes to grab anywhere from two to four players when the frenzy begins on Tuesday and it has to have fans excited to see what this team looks like come July 2, 2014 and beyond.