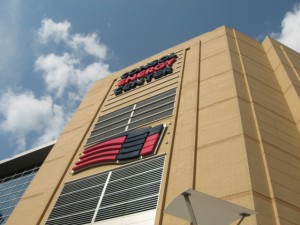 There will be approximately 2,000 tickets available for each game during the inaugural season in the CONSOL Energy Center.

The team recently cut off season ticket sales at 15,000 to ensure that tickets would be available for folks interesting in single game seats. The remaining tickets were also allocated to “group sales” and the American Eagle Outfitters Student Rush Program.

“The demand for season tickets is high, and we have a season ticket waiting list, but we think it’s very important to hold a substantial allotment of tickets for single-game sales to the general public,” said David Morehouse, CEO of the Penguins.

“Single-game tickets, group sales, Student Rush – these enable us to make the excitement of Penguins hockey and the new CONSOL Energy Center available to the widest range of fans.”

Starting Sept. 10 at 10 a.m., single-game tickets may be purchased online at ticketmaster.com or by calling 1.800.745.3000. They also will be available at all Ticketmaster outlets, and at the Dick’s Sporting Goods Box Office at CONSOL Energy Center.