The Penguins fell to the Montreal Canadiens 3-0… but get a good chance to rebound against the Edmonton Oilers tomorrow afternoon. 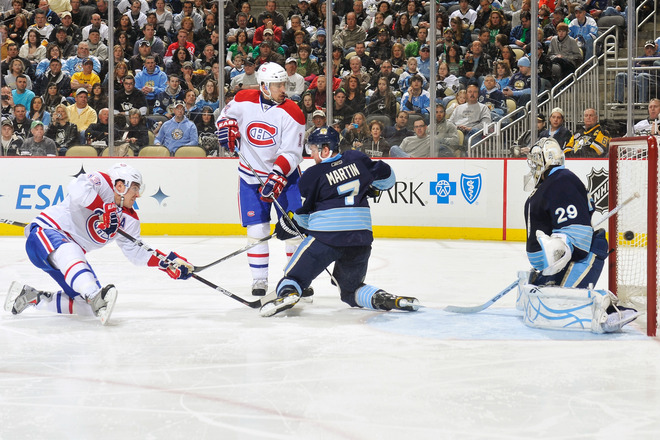 This certainly wasn’t one of the Penguins finest efforts, in fact most of the afternoon could be categorized as a stinker. They gave up quick goals at the beginning of the first and second periods and were never able to rebound from them. They allowed themselves to get drawn into a couple of scrums and fights that probably shouldn’t have happened and didn’t get the emotional boost out of them that they had hoped.

The Penguins also managed to allow 3 goals on 12 shots, which prompted a goaltending change. Marc Andre Fleury was hooked for the 2nd time in his last six starts… though Dan Bylsma said that he was looking to change the momentum of the game.

Carey Price played a nice game and was awarded the number star for his troubles. Though he faced a barrage of shots at time from the Birds, their own inability to play their system and their game was their biggest undoing this afternoon.

Dan Bylsma didn’t seem to find much good in his team’s game this afternoon..

“I don’t think that was a very well executed game, one of which we were able to get into the game and it was evident with the way we executed,” said Bylsma. “They didn’t have to work very hard to get those two goals and it put us behind the eight ball and it wasn’t the only thing we didn’t do very well.”

Overall it was a disappointing afternoon for the Penguins who left two big Eastern Conference points on the table today. Though tomorrow’s game will not have the same magnitude in the standings, hopefully they will be able to bounce back with two points against an Edmonton team that has been run through the wringer on their current road trip. They have had to face the Philadelphia Flyers, the Washington Capitals and the Detroit Red Wings… a trio of games that would look daunting on anyone’s schedule…