Welcome to our newest writer, Al Willig! Al will focus on the Senators, but will be chiming on other NHL stories as he sees fit. Enjoy!

(As we barrel into year number two here at FTP, I have many things in the hopper. One of which is to add a couple of new writers and that is what we are doing today. I am proud to introduce Al Willig. I met Al over the summer through a mutual friend when we added him to our epic IOMTHL Dynasty Fantasy Hockey League. At the time I had no idea that he was interested in blogging or that he had done it before for ESPN Fantasy Sports and his own blog, Hockeyschlock. Al focuses on the Ottawa Senators, but will also be chiming in on other NHL stories as he sees fit. As I think you will see from his first piece, he will be a great asset to the team. Welcome aboard Al! – Metz) 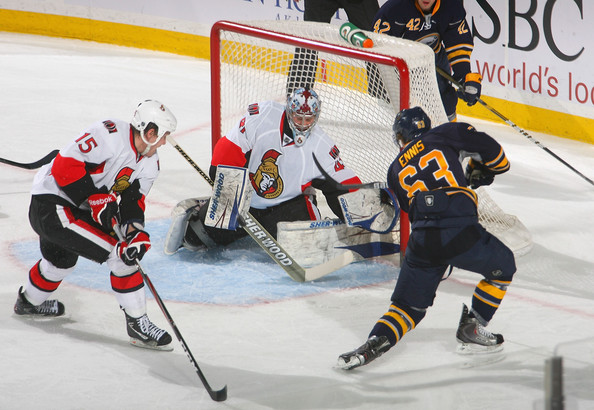 I have said to anyone who would listen (and I guess that is all of you now); I don’t want the Senators to re-sign Craig Anderson. They should sign an Alex Auld type goaltender for a couple years and live with the losses. The Senators are not going to make the playoffs next year with or without Anderson and if Anderson were to play well next year, they would win more games than they should and perhaps worsen their draft position.

The 2012 draft is better than the 2011 draft and having good position will go a lot farther towards getting them a Cup than having Anderson for three years. If the Senators just want to have a team that makes it back to the playoffs, this is not a very good rebuilding strategy.  And, if they re-sign Anderson and he ends up stinking like he did in Colorado this year, they will have over-paid based on the reported extension of $3.7 million he turned down from the Avalanche. It is really a lose/lose situation to re-sign him.

The Senators faithful(less) have been split as to what should happen with Bryan Murray when his contract expires.  Many claim he is responsible for the “mess” the Senators are in currently.  The mess the team is in could have happened last year or the year before or two years from now, but it was going to happen. They were an aging team when Murray took over. Murray tried to patch things together to stay in the playoffs and making the playoffs means a lot of money to an owner, so you cannot blame Eugene Melnyk for issuing those marching orders. After last season’s entry into the playoffs, there was at least some reason to be optimistic they could get back there.  As it turns out, the optimism was misplaced but at least management had the chutzpah to do what was needed now.

I do not love every move Bryan Murray has made with the NHL talent but there can be little argument with what Murray has done in restocking a system that was left largely bare under John Muckler’s term as general manager.  Muckler’s drafting was nothing short of abhorrent.  His one decent draft year was 2001 in which he drafted regular NHLers, Jason Spezza, Tim Gleason, Ray Emery, Christoph Schubert and Brooks Laich.  This was his first year with the club so the majority of the work in targeting players was done by the previous administration.  From 2002 through 2007, the NHL regulars Muckler drafted are Patrick Eaves, Brian (cough) Elliott, Peter Regin, Andrej Meszaros, Brian Lee, Colin Greening (not yet a regular, but appears to have a future), and Nick Foglino.   There is not a “star” in the bunch.

Since Murray took over in 2008, he has drafted Erik Karlsson and Zack Smith who are already regulars with the club.  He has also drafted Patrick Weircioch, Jared Cowen, Jakob Silfverberg, Robin Lehner and traded his number 1 pick in 2010 for David Rundblad who has 50 points in 55 games as a 20 year old defenseman in the Swedish elite league where he plays against men.  All of these players appear to have an immediate future with the Senators.  Add to that the college signings of Jesse Winchester and Bobby Butler who are regulars with the club, and it is very clear that Murray knows what he is doing.  It is also clear that John Muckler did not.

Firing Murray now would be firing him at a time when they need him most to do what he has done best; build a young team through the draft. He did it in Anaheim, he did it in Florida and they should let him do it here. By the time the Senators are back in the playoffs, he’ll be ready to retire and they can hand it off to someone else, but for now, he is exactly the right man to lead this team back to prosperity.