The Penguins fall to the Blues 3-2 at the Consol Energy Center. 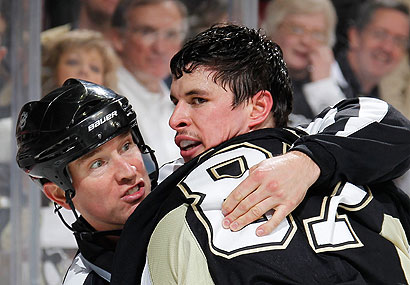 There isn’t a whole lot to say following a performance like the one the Penguins’ put forth this evening at the Consol Energy Center. Sure there were a couple of bright spots such as the play of Marc Andre Fleury, the wheeling and dealing of the sniping Crosby, Malkin, Neal line, but it sort of ends there. The Birds came out sloppy from the earliest moments and looked tired and lethargic throughout.

The let down is a bit forgivable when you consider the emotional roller coaster that the entire organization has been on during this week’s “Crosby Comeback.” To a man, Crosby included, they just didn’t look ready to play from the earliest moments of the game.

Rather than run through it all, here are some quick observations and quotes from tonight.

First off, congratulations to Penguins’ 25,000,000th fan, Tom Mimidis. He was honored during the second period with a signed Sidney Crosby jersey, upgraded seats and a Penguins road trip. Here’s to 25,000,000 more fans through the gates here at the Consol Energy Center.

Paul Martin again was victimized on several occasions. He can be dubbed the culprit on both regulation goals by the Blues. The first of which came off of a horrid giveaway to Scott Nichol. Martin tried to get to the shooting lane to block the shot, but Nichol’s shot hit his stick, shattering it, and deflected into the net. The second goal came after Martin got caught up ice, raced to get back, but didn’t take the body — the result? Jamie Langenbrunner’s goal.

Sidney Crosby showed a little bit of rust tonight, which is to be expected. He admitted to being a bit tired and sore after his first game back and it was evident during the early stages of tonight’s contest. He was still in the middle of the action throughout, but he looked a little frustrated at times. The Penguins’ captain had a couple passes go awry and watched a great scoring chance fall by the wayside after he fanned on his shot after taking a pass from James Neal.

“Tonight just mistakes, clear cut…. I had a couple chances, I bobbled one, missed a pass on another,” Crosby said from his locker stall post game. “Whether its rust, or not being ready or focused or whatever it was, that’s not good enough. I’ve got to make sure I am much better.”

Crosby and Penguins looked a bit better in the third, but it was too little too late, as the Blues outplayed them throughout most of the evening.

“The first two periods weren’t good,” Crosby said. “No real explanation or excuses. I think we got outplayed and then in the third we were much more desperate and got to the right game a bit more and got good results, but we didn’t deserve that one.”

It isn’t surprising to see Crosby being that hard on himself…he is sort of a perfectionist. It will only make him better in his next game come Friday night.

Crosby came close to getting in a fight with David Backes. He took a shot in the face from the Blues forward and took plenty of contact throughout the evening. He came through it all with flying colors, which is another big step in his recovery. Interestingly enough he said he wasn’t surprised to see Backes in the scrum coming at him…does anyone remember a specific history between the two?

“I don’t know, he grabbed me in the scrum,” Crosby said of his fracas. ” You kind of expect that going into scrums, somebody is grabbing you. I wasn’t surprised it was him… that is just what happens and we ended up getting coincidentals.”

Speaking of coincidentals, Crosby took three penalties tonight…something we aren’t quite used to seeing. He wasn’t very thrilled with the fact that he took them, but also mentioned that he didn’t necessarily agree with them all either.

“I like to think that I am out there trying to score, not trying to take penalties or agitate,” Crosby said “If those were three infractions then there were definitely a handful on their side too. I am fine with calling it tight as long as it is tight both ways and I don’t think that was the case tonight.”

Evgeni Malkin had the shift of the night when he danced Ian Cole for a good twenty seconds behind the Blues net during the third period. The Penguins didn’t get a great scoring opportunity out of it, but it was great to watch. Angie Carducci, who covers the Birds for Inside Hockey, said that it was very reminiscent of Jaromir Jagr, I tend to agree. Geno has long been great below the goal line and it was fun watching him go right-to-left-to-right-left again and again before finally dishing the puck. 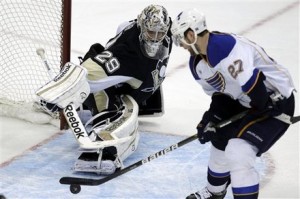 Marc Andre Fleury was the number one star on my scorecard, though he didn’t get a mention on the official one. He gave his team a chance to win a game that they had no business being in late. The Flower stopped 40 Blues shots in the loss.

I asked him if it said anything about the character of the group that they were still able to pick up a point in a game in which they struggled through the better part of two periods.

“We’ve got character in the room,” Fleury said. “I was just trying to keep the score low and I know with the guys we have here we can get some goals and they did in the third.”

It was mentioned above, but Dan Bylsma went into his back of tricks and pulled out a very dangerous looking Sidney Crosby, Evgeni Malkin, James Neal combo during the third period when the team was down 2-1. The move paid off as Neal took a feed from Malkin and buried it for the tying goal. That is a line that we will likely see when the team is losing and or in need of a big goal as we move forward.

Zbynek Michalek had the quote of the night:

“Our start wasn’t good, and they got a lead. And we battled like b*stards the rest of the game and came up short in overtime”

The good news after an evening like this is that the team can get a day of relaxation in tomorrow during the Thanksgiving holiday here in the USA and then get right back at it on Friday evening.