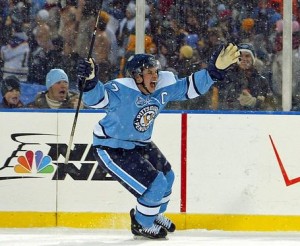 Public skating sessions and youth hockey games will be featured on a second outdoor rink being built at the new Stage AE, adjacent to Heinz Field, as part of a week-long celebration of hockey leading up the 2011 Bridgestone NHL Winter Classic, the Pittsburgh Penguins announced today.

The NHL-sized rink, located in the Stage AE parking lot, will be installed from Dec. 19-23 and open to the public from Dec. 24-Jan. 2 It will be known as the “Winter Classic Community Rink at Stage AE.”

Among the many public skating sessions will be those on Christmas Eve and New Year’s Eve.

The rink is presented by PNC, Trib Total Media, GetGo from Giant Eagle and PJ Dick.

“Building a second outdoor rink will enable so many people in the Pittsburgh area to take part in the celebration of the Winter Classic,” said David Morehouse, CEO of the Penguins. “Skating outdoors in the shadow of Heinz Field, with the city skyline and Mt. Washington as the backdrop, will be an incredible experience for all involved.

“We’ll also be able to host a number of youth hockey events, to give these kids the thrill of playing outdoors as part of this once-in-a-lifetime Winter Classic week.”

Construction on the main Winter Classic rink at Heinz Field will start on the night of Dec. 23 and will be completed by Dec. 30. The Penguins and Washington Capitals will skate there for the first time on Friday, Dec. 31. The 2011 NHL Bridgestone Winter Classic will be played on Saturday, Jan. 1 at 1 p.m.

But the Winter Classic Community Rink at Stage AE will be in operation starting with public skating on Christmas Eve, including a “Skate With Santa.” The rink will utilize dasherboards and Zambonis from the Civic Arena.

Among the youth hockey events will be an international AAA bantam tournament featuring two Pittsburgh Penguins Elite teams (one coached by Mario Lemieux) and the Washington Junior Capitals. It also will include teams from the hometowns of Penguins stars Sidney Crosby and Evgeni Malkin – from Cole Harbour, Nova Scotia and Magnitogorsk, Russia.

Other youth hockey leagues and teams that have games scheduled at the Winter Classic Community Rink at Stage AE are:

A complete schedule of public skating sessions and youth hockey games will be announced in the near future.