Live at the CONSOL Energy Center for Pens/Rangers… check in throughout for all of the thoughts, analysis, observations, and hullabaloo. 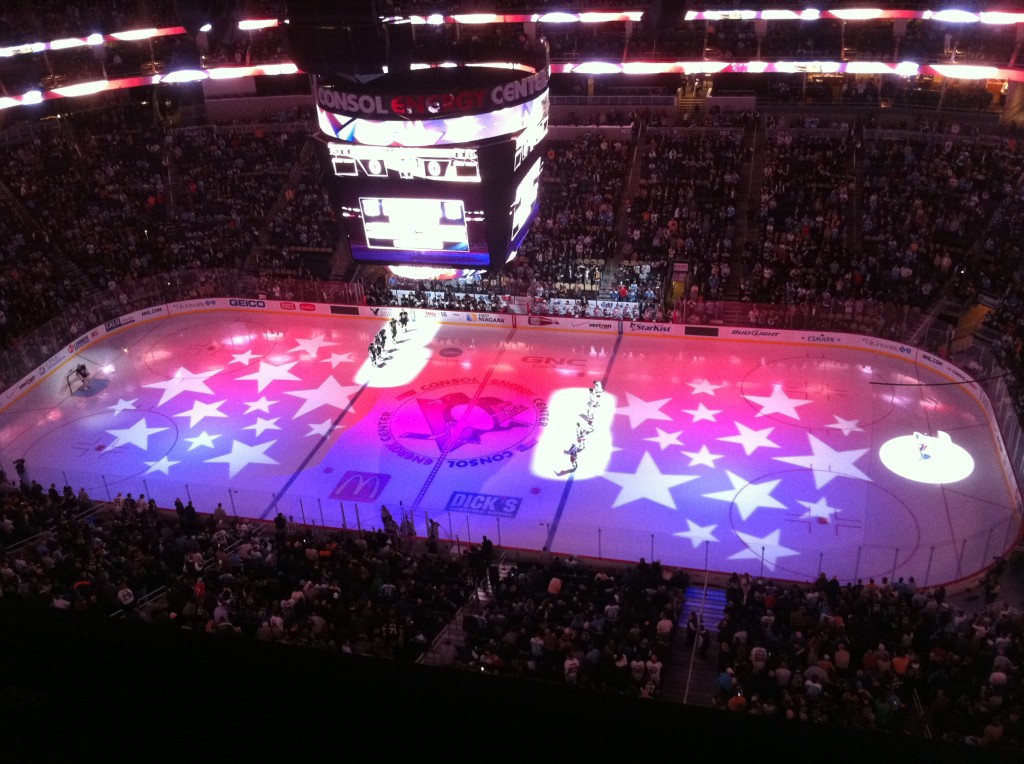 As usual I am live at the CONSOL Energy Center this evening taking in the Penguins tilt with the New York Rangers. It should be a spirited affair if these two teams play anything like they each did in their previous games. That would make for an exciting evening with goals being scored on both sides and some fun back and forth action.

Unfortunately, these these two teams have also been known to play some tight games over the years and we could be in for a major league 2-1 snooze-fest… I am pulling for the aforementioned exciting game. How about you guys?

I came awfully close to passing on tonight’s game due to the fact that one of my all time favorite bands were scheduled to play in town this evening — Suicidal Tendencies. However, the show was suddenly canceled for reasons that I have not been able to find out. It is a shame to say, but I have a feeling that it was probably due to poor advance ticket sales. I was pretty disappointed to say the least, as I have never gotten the chance to see Psycho Miko and the boys in action. Hopefully the opportunity will present itself again at some point. In honor of that new sighting… enjoy “Pledge Your Allegiance” from the boys.

Speaking of music, it is worth noting that Vinny has brought back a successful mix from last season and has been playing it over the past few home game…

The teams are on the ice for the warm-up at the moment and Mike Comrie is dressed. We already know that Tyler Kennedy is going to miss this game with a sickness, so there is a good chance that Comrie will get back in the line-up.

Marc Andre Fleury is expected to make his third consecutive start and it is much deserved. He has looked an awful lot like the player he was two years ago over the past couple of games and it is nice to see him being rewarded with some starts. It is also good to get Brent Johnson a bit of a break so that he will be ready when his next opportunity comes along. He came into the season planning on playing 20-25 games and was on pace to hit that mark before Christmas. 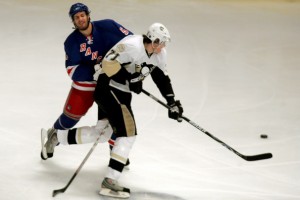 It will be very interesting to watch Evgeni Malkin tonight. Will he be able to continue his recent hot play? I certainly hope so, as the Penguins are a very tough team to content with when he is flying. One idea that I have about his recent hot streak is that it has a little bit to do with his wingers. One of his most successful seasons came while playing on a line with Ryan Malone. I am not saying that Arron Asham is as talented as Malone, but he does play a similar game. He can read and react off of Malkin, he goes to the net and opens space. When Geno has a winger who can play that “bull in a china shop” role, he gets into gallop mode. What do you guys think?

Stay tuned for more throughout the evening, as I will be bringing you all of the action, analysis, thoughts and observations from the CEC.

We are two minutes away from game time and there are still pockets of empty seats in the building. It was an unbelievably bad traffic day though. My commute to the area took about 20 minutes longer than normal and that was at 5:15 pm.

The already might have derailed their evening here by having Sarah Marince do the anthem… where is Jimerson!

Malkin’s line has definitely been generating some momentum in the offensive zone. Unfortunately that was just derailed when what looked like a possible Penguins power play ended up being offsetting minors to Malkin and Michael Del Zotto.

Geno Machino just danced through the neutral zone and came close to beating Hank Lundqvist with a wicked wrister. He was moving to his left and shot back across his body to the far side of the net. Hand stayed in position and snapped the puck out of the atmosphere…

The Penguins just got back to back great shifts from both Crosby’s and Malkin’s lines. Sid was flying all over the zone and created several chances in close. Then it was Malkin’s turn. He hit the ice and fed Asham for what came very close to being a backhand goal. The line then kept the puck in the zone for the entire shift, creating chance after chance. It all finished up with a great keep at the blue line by Kris Letang. Letang then came close to burying a shot as he glided down the right wing…

Mighty Mike Comrie just got involved in another fight… I guess that is his way of saying that he wants to be in the line-up. He threw down with the Rangers Ryan Callahan… it was a pretty spirited match-up. More so than I figured it would end up being. Comrie eventually got the better of Callahan as the two fell to the ice.

New Pirates manager Clint Hurdle is in the house tonight. Not sure about you guys, but I am pretty excited about the hiring. Hurdle was the hitting coach for the top hitting team in baseball last season, the Texas Rangers.

One period in the books here in Pittsburgh and the the teams are scoreless… the Penguins are ahead on the shot clock 12-5 and definitely had the better of the opportunities during the period. Hank Lundqvist has done a very nice job of keeping his team in the game, as some of the chances the Penguins got were very good ones.

Did I mention that it is freezing in here? If not… well, I should have.. It has been getting progressively colder by the game and tonight’s my hands are actually starting to hurt a bit. Crazy… fingerless gloves anyone? Send them over…

Wow… Crosby is throwing some seeing eye pucks around tonight. On at least three occasions thus far he has sent a cross ice no looker right to the blade of a teammate. The last one clearly caught Chris Kunitz by surprise, as he looked almost startled about the puck getting to him.

The Birds just went one, two, three for a buck on glorious scoring chances… though they weren’t able to put the puck past Lundqvist… They got some great movement during th power play.

An old friend just did what he always did so well… unleashed a wicked wrister from the high slot… Erik Christensen was in the right place at the right time and buried a puck behind Fleury that was just out of the reach of Deryk Engelland.

1-0 Rangers. It is a shame to see one go in like that at the other end after the chances have been so heavy in front of Lundqvist…

Just got a text saying: “I guess we are playing the ‘better lucky than good’ Rangers tonight?” I have to say that thus far tonight, that text is an accurate statement…

They are being outshot 2 to 1 and as of a few minutes ago had only 7 shots on goal… they are up to 11 now. Going to be an interesting final 24 minutes…

Pascal Dupuis just took a Marc Staal stick to the face and the Birds will be up a man for 4:00 minutes…

Alex Goligoski again looks like he will be punished if he shoots the puck… he had several chances to get the puck at the net and chose to do his usual “yo, yo” move at the blue line before passing off to teammates…

The Rangers eventually got a clear out of the situation and pinned the puck deep in the Penguins zone for 40 seconds.

Two periods in the book and the Penguins still hold a significant advantage in shots… leading 24-14. However that hasn’t translated into offense as they trail 1-0 on the scoreboard on a goal by former Penguin Erik Christensen. Ironically it was assisted by former Penguin Ruslan Fedotenko…

Hank Lundqvist is still holding the Birds at bay and he has had a good bit of luck on his side. Several posts and fortuitous bounces have assisted in keeping his shutout intact.

The third period is under way… I just heard something wacky in the men’s room. I believe it was Steve Meares who suggested that Mike Comrie would net the tying goal late in this period. We shall see about that…

What are your predictions?

Mark Letestu just got in behind the defense, but Lundqvist kicked away his shot attempt. Nice seeing him streak in with speed and get a shot off though. Some youngster might panic in that situation.

Looks to be a couple of rough patches out there tonight. Several players have fallen down in the neutral zone while trying to move through the area between the Minolta advertisement and center ice.

I swear, Shinedown’s “The Sound of Madness” could spruce up anything… including a funeral…  especially when being played loudly.

Malkin just unleashed some Ovechkin-like fury, but Lundqvist was there to make the stop. That puck was moving though…

The Penguins will get another crack with the extra man… Marian Gaborik was just whistled for hooking.

A wide Letang shot easily clears the zone for the Rangers…

Matt Cooke just took Marc Staal off of the ice, which could help the Penguins cause. He took a punch in the neck and turned with a punch of his own. A huge scrum broke out, but those two got the only penalties…

Brooks Orpik was just working down below the goal line for far too long. He ended up being dumped and tried to get away with a sly hand pass to Max Talbot. The official had been watching the play closely and made the call.

Penguins power play on the way… 4:37 remaining. Probably their last and best chance to get this thing tied up. We shall see….

Chris Kunitz just missed tying this up… got a feed right across the goal mouth, but Hank made another toe stop.

We just had a long delay as a Ranger player took a puck to the forehead, leaving a significant amount of blood on the ice.

Seconds later, Matt Cooke took a Dupuis feed as he was coming down the wing… quickly fired it past Lundqvist short side, causing Lundqvist to shatter his goalblade over the back of the net…