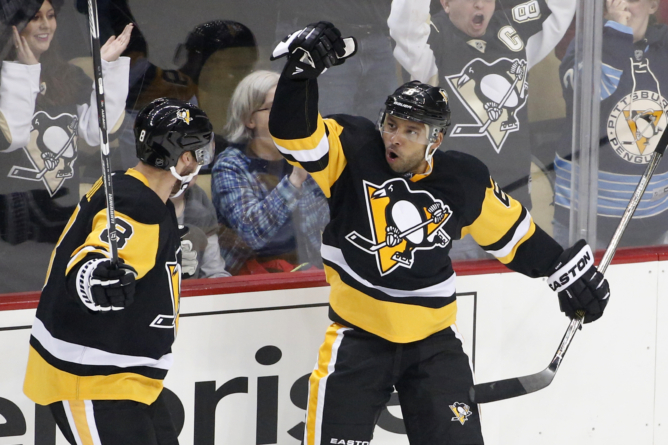 PITTSBURGH – The Pittsburgh Penguins have clearly defined speed as their identity and competitive advantage.

And when the Washington Capitals upped the physicality, the Penguins weren’t deterred.
It helped Pittsburgh cap its best weekend of the season with significant back-to-back victories as the Penguins routed the NHL’s best team, defeating Washington, 6-2, Sunday at Consol Energy Center in Pittsburgh.

“What I love about our team is you can define toughness a lot of different ways,” Penguins’ coach Mike Sullivan said. “I strongly believe we have a tough team because we play through a lot of circumstances and don’t get distracted from our game.

The Penguins won their sixth straight game in impressive fashion. It’s the NHL’s longest active winning streak, helping Pittsburgh pass the New York Rangers and move into second place in the Metropolitan Division for the first time since November 6.

“We think our core guys want to play a fast game because they’re good skaters and they see the ice well,” Sullivan said. “It has to be the foundation of our identity.”

It was on full display Sunday against the best team in the league.

Tom Kuhnhackl scored his third of the season and finished with a career-high three points, while Trevor Daley (6) and Matt Cullen (12) both had a goal and an assist. Justin Schultz scored his fourth of the season, but first as a Penguin, while Bryan Rust also netted his fourth.

Chris Kunitz scored his 16th and Sidney Crosby extended his point streak with two assists for the Penguins, who won in convincing fashion at their rivals from Philadelphia before following it up with another impressive outing against Washington, the top team in the league.

Marc-Andre Fleury faced a combined 35 shots between the two games, turning aside 16 of 18 on Sunday.

“We really settled in and built off that game (against Philadelphia),” Crosby said. “We had a lot of jump and a lot of desperation.”

Pittsburgh won seven of its last eight, including six straight during a nine-game stretch against division opponents. The Penguins won 14 of their last 18 against Metropolitan Division foes.

Pittsburgh equaled its longest winning streak of the season and won 10 of the previous 13 games overall. The Penguins are 5-0 since the upper-body injury to Evgeni Malkin and 10-4-1 without their star forward this season.

Crosby, who leads the league in points since Dec. 12, ranks third overall, just four behind Jamie Benn of Dallas.

Jason Chimera scored his 18th and Andre Burakovsky his 16th for the Capitals, who had a chance to clinch the Metropolitan Division with a win against Pittsburgh.

Pittsburgh chased 43-game winner Braden Holtby and put it away with two goals in the first eight minutes of the third period. The Penguins are a perfect 33-0 when leading through two periods.

Cullen scored the first, giving the Penguins a two-goal lead when his shot hit Holtby’s blocker, rolled down his back and into the net.

Later, Kris Letang lobbed a puck into the Capitals’ zone for Crosby, who won a foot race, sending a cross-ice backhander to Kunitz for a one-timer.

“I think all night we continued to keep playing the same way regardless of what happened,” Crosby said.
And it threw the Capitals off their game.

Tempers flared in the second period during a sequence started when Rust and Mike Weber tangled in the Capitals’ net. The action continued during a Penguins’ power play where a would-be Crosby goal was waved off. T.J. Oshie later punched a vulnerable Crosby behind the net during a scrum that sent four players to the penalty box.

“For me, it’s just hockey,” Sullivan said. “I think our guys do a great job and it starts with the captain and works down. Our push back is through our play and what’s most important is between the whistles. Our guys did a real good job in that regard.”

Weber later pasted Rust into the side boards, a play that earned him a boarding major and a misconduct, while Alex Ovechkin injured Penguins’ defenseman Brian Dumoulin with a hard hit into the end boards in the third period.

“It’s a physical game,” Sullivan said. “Teams are going to play the way they play. We have to be crystal clear what gives us the best opportunity to win games. I think our team has really evolved as far as resilience and ability to not get distracted from our game.”

It showed again when the Capitals scored the tying goal as Burakovsky beat Fleury on a breakaway. Kuhnhackl responded 42 seconds later, sending a one-timer from Cullen behind Holtby, giving the Penguins the lead for good.
“That’s a huge goal,” Crosby said. “Who knows what would happen if we don’t get a quick one like that right away.”

NOTES: Pittsburgh has won six of its last seven home games, giving up 11 goals during that span. … The Penguins are 15-3-2 in their last 20 home games. … Letang established a career high with his 55th point. … Fleury has won eight of his last 10 starts. … Daley tied a career high with three points. … Patric Hornqvist has 34 points in his last 36 games.