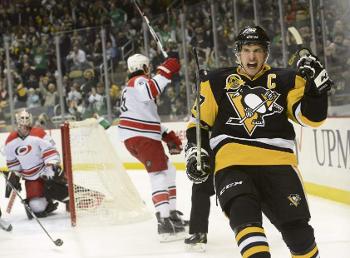 PITTSBURGH – A poor start sparked the Pittsburgh Penguins to another much-needed victory.

Sidney Crosby scored twice and Phil Kessel also had a goal as the Penguins, in the midst of a heated playoff race, scored four unanswered times to defeat the Carolina Hurricanes, 4-2, Thursday at Consol Energy Center in Pittsburgh.

“Every point we can get, no matter who the opponent, our level of desperation has to be there,” Crosby said. “That has to be there every night because we have to find ways to get points.”

Crosby scored his 30th of the season in spectacular fashion and his 31st – the eventual winner – later in the second as Pittsburgh rallied from an ugly start and an early deficit.

Kessel scored his 21st in between the Crosby goals and Nick Bonino his fifth in the third period for the Penguins, who earned their fourth straight victory and eighth win in 11 games. Carl Hagelin tallied a career-best three assists and Matt Murray, making his first start in 11 days, stopped 31 shots.

“I think we’ve been in a playoff mode for close to a month,” Penguins’ coach Mike Sullivan said. “Every game, we’re trying to climb the standings, but it’s hard to create traction.”

Pittsburgh is clinging to the top wild-card spot in the Eastern Conference, while creeping closer to the New York Rangers and New York Islanders for second and third, respectively in the Metropolitan Division.

They’re doing it without Evgeni Malkin, who is out for the rest of the regular-season and likely the first round of the playoffs with an upper-body injury suffered a week ago at Columbus. The Penguins are 8-4-1 this season without Malkin, who is second on the team with 27 goals and 58 points.

Crosby has taken charge in Malkin’s absence, as he extended his consecutive points streak to 10 games, netting six goals and 16 points during that span. Crosby, who leads the NHL in points since his streak began, reached 30 goals for the seventh time in his 11-year career and is the only player in the league with multiple point streaks of nine games or more.

Crosby started the Penguins’ comeback, cutting a two-goal deficit in half with a highlight-reel goal thanks to an impressive individual effort.

It started in the neutral zone when Crosby flipped the puck past Jacob Slavin and fought through a check along the wall. He skated in on goal, cutting inside Ron Hainsey at the top of the crease before flipping a backhander behind Hurricanes’ goaltender Eddie Lack.

Kessel tied it in the second period with his first goal in six games. Ian Cole started the play when a shot attempt from the slot rolled off his stick to Hagelin, who kicked the puck to Kessel at the far post for the tap in goal.

Crosby put the Penguins in front for good later in the period, dropping to one knee and turning his body to deftly deflect Cole’s point shot behind Lack.

“(Cole) made a great play on the second one,” Crosby said. “He picked his head up and kind of sold a shot. I just tried to get my stick on it.”

Phillip Di Giuseppe scored for the third straight game, his seventh of the season, while Riley Nash added his eighth 5:10 into the game for Carolina, which failed to earn a point for the first time in six games.

Lack made 44 saves in goal for the Hurricanes, who are fading down the stretch and are now six points from a playoff spot after Detroit’s win against Columbus on Thursday.

“They’re a fast team,” Di Giuseppe said of the Penguins. “We have a quick team ourselves, but I think they played a little bit faster than us.

“We just have to learn from tonight and bounce back. The next game is going to be huge for us.”

The start was strong for the Hurricanes.

Di Giuseppe opened the scoring 42 seconds into the game, taking a Kunitz giveaway and squeezing a shot between Murray’s pads.

The Hurricanes took a two-goal lead less than five minutes later on a play that started from a three-on-one. Nash, alone in front, one-timed Jeff Skinner’s behind-the-net pass past Murray to make it 2-0.

Crosby helped the Penguins rebound from the poor start.

“Luckily we had a lot of time,” Crosby said. “We had some mistakes early, and it could’ve been a different game, but we had time to climb our way back and found that level of desperation.”

NOTES: Crosby has at least one point in 17 of his last 20 home games. …The Penguins are a perfect 31-0 when leading through two periods, the only NHL team with an unblemished record. … Pittsburgh is 14-3-2 in its last 19 home games. … The Penguins, who played Carolina for a fifth time this season on Thursday, won nine of the last 12 in Pittsburgh against the Hurricanes. …The Penguins celebrated Pittsburgh’s bicentennial with a pregame ceremony.