Dan Scifo gives us his take on last nights embarrassing 8-5 loss to the Philadelphia Flyers. 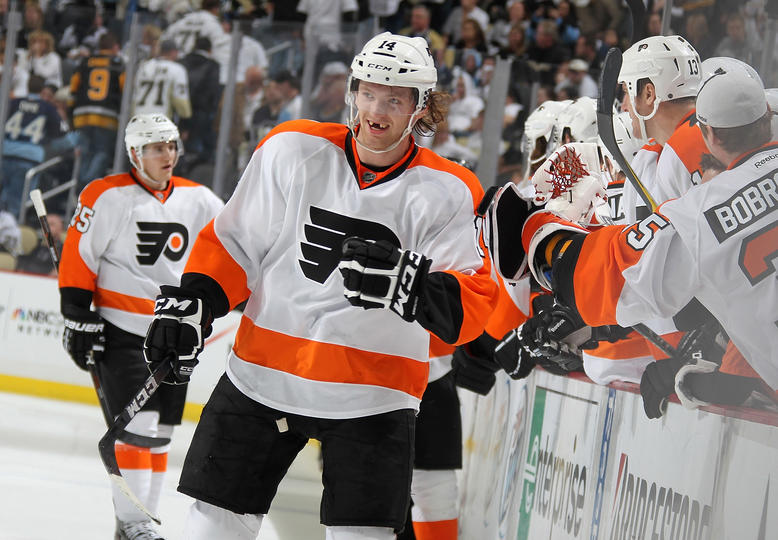 By Dan Scifo
From the Point contributor

PITTSBURGH – No matter how hard they try, the Pittsburgh Penguins are unable to protect a lead against their rival Philadelphia Flyers.

Pittsburgh led four times, and even held a pair of two-goal advantages, but they still couldn’t get the better of the Flyers, who got hat tricks from both Claude Giroux and Sean Couturier to stun the free-wheeling Penguins, 8-5 in front of the largest hockey crowd in Consol Energy Center history Friday during Game 2.

“It was a back-and-forth game, but the bottom line is they’ve won two games, and while that might be tough, it’s up to us to go to Philly and win our first game,” said Penguins’ head coach Dan Bylsma.

Now the Penguins will be the ones looking to rally after falling in a deep 2-0 hole headed back to Philadelphia for Game 3 of the best-of-seven series 3 p.m. Sunday. 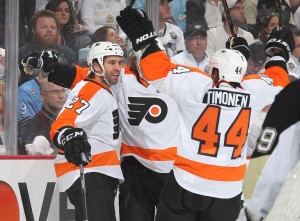 “I think they’re difficult losses, there’s no question about it,” Bylsma said. “But we have to put away this loss and go into a tough place to play.”

Pittsburgh sat back and helplessly watched a three-goal lead evaporate during a stunning Game 1 overtime loss Wednesday. But two days later, the Penguins appeared content to engage in a back-and-forth shootout with the Flyers, who have rallied from at least two goals back to defeat their cross-state nemesis, now four times in less than a month.

That didn’t work either.

“We need to limit our mistakes,” said captain Sidney Crosby. “That’s what it comes down to. Every mistake we made has ended up in the back of our net, so we have to be a lot better.”

The Penguins, who lost five straight home playoff games for the first time since the late 1970s, held leads of 2-0, 3-1, 4-3, and 5-4, but Philadelphia responded every time to tie the game and eventually take the lead to escape Pittsburgh with a 2-0 series lead.

Philadelphia led once, on a goal by former Penguin Jaromir Jagr, and made it stand for the final nine minutes of the game.

Giroux enjoyed a six-point night with three goals and three assists, while Couturier had four points. Former Penguin Max Talbot also netted a goal and an assist for the Flyers, who are 17-0 when they win the first two games of the series.

“We have to execute better,” said defenseman Brooks Orpik. “They’re executing better and taking advantage of every mistake we make. We’re kind of hanging our goalie out to dry, that’s for sure. It’s not effort. We have to work through the mistakes we’re making.”

Flyers’ goaltender Ilya Bryzgalov turned aside just 23 of 28 shots, but he was sharp with the Penguins desperately trying to tie in the final nine minutes of the third.

Couturier capped his hat trick, on a two-on-one with Giroux, just seconds after Chris Kunitz and James Neal nearly tied it with less than two minutes remaining.

Kunitz scored a pair of power play goals, Crosby and Tyler Kennedy scored for the second straight game, and defenseman Paul Martin also netted a goal, but it wasn’t enough for the Penguins, who, prior to Friday night, followed each of their last three postseason losses against Philadelphia with wins.

It wasn’t meant to be this time, even though Crosby provided an immediate response from Wednesday’s heartbreaking overtime defeat when he gave the Penguins a 1-0 lead 15 seconds in the game.

The Penguins made changes in an effort to jump-start a fledgling power play, 0-for-36 coming into the game and sloppy through three Game 1 opportunities, and those adjustments worked immediately.

The Penguins, with Kris Letang and Steve Sullivan manning the point, effortlessly worked the puck around and converted on their first power play opportunity as Kunitz banged home a pass from Neal from the slot just 53 seconds after Nicklas Grossman was whistled for hooking.

They nearly cashed in on their second chance, but Bryzgalov robbed Letang with a dazzling glove save.

“Those guys have done a great job all year and have proven they’re really good in every position,” Crosby said.

Seconds later however, Talbot got the Flyers’ on the board with a short-handed goal, dumping a rebound behind out-of-position Penguins’ goaltender Marc-Andre Fleury, who made the initial breakaway stop on Giroux. Fleury stopped 23 of the 30 shots he faced.

Special teams played a huge part in the back-and-forth shootout as the Penguins, after struggling on the power play in Game 1, scored twice with the man advantage, while Philadelphia netted a power-play marker and a pair of short-handed goals.

Martin scored in the final minute of the first period to make it 3-1, but the Flyers, like they did in Game 1, battled back from the two-goal hole to tie the game when Giroux scored a power play goal and added a short-handed marker six minutes later.

“We were really good at that, and we need to get back to doing that.” 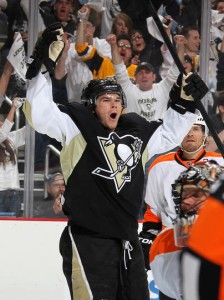 Kunitz netted his second power play goal, dumping the rebound from a Neal shot past Bryzgalov, but the Flyers tied it again, scoring in the final minute of the second period when Couturier registered his first career playoff goal with 2.8 seconds remaining.

It wouldn’t be his last.

Couturier scored again, turning a Ben Lovejoy turnover into a partial breakaway, to tie the game just 17 seconds after Kennedy gave the Penguins a 5-4 lead.

“They have a lot of great players and they’re going to score goals,” Neal said. “It’s how we respond. I thought we did a good job, but we just need to find a way to win, to close out games and play a full 60 minutes. It’s frustrating when we have such a good first period and let it slip away.”

It was Jagr who provided the final dagger, as the hated Pittsburgh villain scored what turned out to be the game-winner midway through the third.

And the Flyers, unlike the Penguins, were able to make it stand.

“Everybody talks about home ice advantage and it’s not always the case where you’re guaranteed to win your games at home,” Crosby said. “You have to make sure you bounce back and that’s the situation we have in front of us.

“We have to win the next game. That’s our mindset and that’s the most important thing for us right now.”

NOTES: Pittsburgh is 5-6 when it falls behind by two games in a series… The Penguins have scored first in nine of their last 11 games against the Flyers. Of those nine, they’ve lost seven… The Penguins lost five straight playoff games for the first time since 2000-2001… The Penguins, 22-8 at home in the second game of a series, lost a Game 2 at home for the second time in franchise history following a Game 1 defeat… Pittsburgh allowed two shorthanded goals in the playoffs for the first time since 1997 against Philadelphia… Crosby’s goal 15 seconds in tied Greg Malone (1981) for the fastest goal to start a playoff game in Penguins’ history. He now has 32 career postseason goals, tied with Ron Francis for fourth place in franchise history.