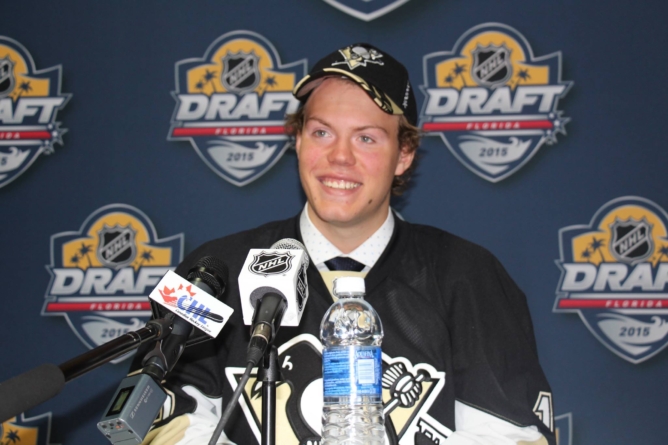 It doesn’t seem like it’s been 18 days since the Penguins’ selected Daniel Sprong with their second round draft pick, but that is indeed the case.

That fact dawned on me while talking with the player selected number 46th overall in Sunrise, Florida back on June 27 at the team’s Prospect Development Camp on Tuesday.

When we got a chance to talk with him moments after his selection, he struck me as calm, cool and collected. He also seemed mature beyond his 18-years, which is something that I always notice when dealing with young people, simply because it isn’t something that you run into often enough these days.

I drew those conclusions after hearing him address the fact that some of his interviews at the NHL Scouting Combine didn’t go as well as he had hoped. He knew there might have been criticisms floating regarding his work in the defensive zone and his overall consistency and he addressed all of them with solid, insightful answers that spoke to the fact that he knew exactly what he needed to do to show the hockey world that they erred by letting him fall to the second round.

Interestingly enough, the past 18 days seemed to have him helped him grow even more as he prepared for this camp and that goes for his mind and body. The 18-year-old started the day with off-ice workouts, which the Penguins’ featured on their Snapchat account. Once entry showed him ripping through pull-ups at a rate that would make even Gary Roberts smile.

Then he took the ice, before meeting again with the media in the afternoon.

I asked him if he was overwhelmed by the skill and speed around him and he readily admitted that he was caught off guard momentarily, but that he stepped up soon thereafter.

It was interesting watching him handle several scrums and one-on-one interviews. He didn’t seem overwhelmed at all, in fact he had my group, which featured Jeff Hathhorn (93.7 the Fan), Jenn Mendez (Post Gazette) and I laughing when he described the one change that stood out since he’d been drafted.

“My twitter blew up,” he said laughing. “It’s one thing, twitter followers went pretty high after that. I think besides social media I think everything stayed the same. I’m still the same kid. I still work hard in the gym and on the ice. I’m just here like every other player trying to impress the management and want to get ready for rookie camp to see what it’s all about in Pittsburgh.”

He isn’t putting any undue pressure on himself in terms of making the team, not that he doesn’t want to play in the NHL as an 18-year-old. It’s just that he seemed to have a mature outlook there as well. He wants to consider all that he is dealing with before setting some goals for himself.

“I don’t know what my expectations are yet,” Sprong said. “Of course I have to set goals for myself. Of course I want to make it as an 18-year-old, that’s every kid’s mindset that comes into camp, you want to make Pittsburgh right away. For me I’m just going to continue working hard and try to impress management and if I get an opportunity to play I’ll show what I can do.”

He’ll have a chance to continue doing that on today, as the campers are set to go through a series of three-on-three drills. Sprong hopes to show that he has improved that defensive game which he was criticized for in the past.

That won’t happen just in the drills either. He is really looking forward to showing that side of his game off in the scrimmage on Saturday afternoon. His hope is that he can show management that he is capable of picking up his play away from the puck while still showing off the offensive flair that had scouts drooling.

“It was good,” he said. “I enjoyed the experience and it’s been a great day so far. I’m just looking forward to tomorrow and the three-on-three competition.

“I think today when we were doing those three-on-three drills, two-on-two drills I thought I showed some better D-zone and just keeping my stick on the guys and staying with my guy. Of course in the game it’s completely different, but I’m looking forward to the scrimmage on Saturday to show that d-zone did get better and I can still bring an offensive game.”

Sprong, who has been the main offensive catalyst for his team in Charlottetown in the CHL, seems to be enjoying getting some instruction from Mark Recchi, who was named the Penguins’ player development coach last season.

“Seeing him (Recchi) on the ice and seeing what he had to tell me on the ice I’m all soaking it in and just happy to be here.”

It is a well-known fact at this point that he has some ties to the area and the organization through playing Bantam hockey in Wilkes-Barre. That fact has been talked about ad nauseam, but I did ask him to talk about the feeling of actually being at Consol Energy Center as a Penguins’ draft pick after visiting during those WB days as a fan to take in a game.

He was glad to oblige.

“For sure, it’s a big difference watching from the stands to going in the locker room, getting dressed and going on the ice now,” Sprong said. “Again I’m very happy to be here and I just picture myself sitting there when I was little. That’s a long time ago and just shows that when you put your mind to something that good things could happen and I’m very happy to be here in Pittsburgh.”

18-year-old forwards do not make National Hockey League clubs often, but it isn’t out of the question and if Sprong can continue to bulk up and show that he has improved his defensive play by the time training camp rolls around he just might be able to do that.

He certainly seems to have an appreciation for what could be a long and fruitful professional career with the Penguins’ organization.

“It’s just part of the pro-life. If you work hard and make the Pittsburgh Penguins this is what kind of life you could have in the locker room, how you get taken care of. So far it’s like your kings here. Everything you need is right there at your feet and it just makes you push harder. I really want to make Pittsburgh this year and I just gotta continue working hard.”