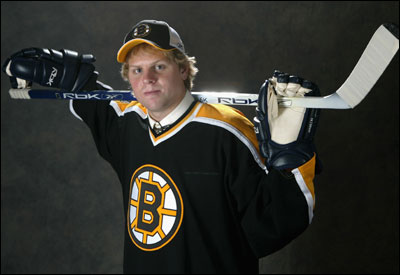 It is sometimes fun to look back over your body of work. So I decided to do so on a Thursday, could it be a Throwback Thursday? Maybe.

In doing so it dawned on me that I once penned a column talking about the ‘WHAT IF’ possibility of the Penguins drafting Phil Kessel instead of Jordan Staal back in 2006. Let’s hop in the way back machine and check it out. I mean, really, it seems appropriate today considering that Phil Kessel is officially a Pittsburgh Penguin.

This was originally published at HockeyBuzz.com on December 30, 2008. Lots has changed since then, but not so much the speculation about how Kessel would fit in in Pittsburgh. So give it a read and take a stroll down memory lane, all the while realizing you’ll actually see this cat in a Penguins sweater this fall.

When I read the lede I laughed thinking for as much as things have changed… they really haven’t changed at all.

If the Penguins have one glaring need, it is a complete lack of scoring wingers. Unfortunately, that has been an ongoing problem in their system for many years now. Sure, they have the top two scorers in the league in Evgeni Malkin and Sidney Crosby, but there is a significant drop in offensive production after those two.

At least Malkin has Petr Sykora a legit top six winger, albeit a fairly pedestrian one, but the team has tried out a cavalcade of third line pluggers, minor leaguers and checkers with their two headed monster and it just isn’t working. Max Talbot, Tyler Kennedy, Chris Minard, Miroslav Satan, Pascal Dupuis, Jeff Taffe, Janne Pesonen and several others have all skated shifts with 71 and or 87…it has not worked and it is only going to get worse as the games start to get more meaningful. If Malkin and Crosby have been able to put up the kind of numbers that they have playing with the aforementioned players, imagine what the totals they would be working with if even one additional goal scorer was on this roster.

The popular speculation is that Ray Shero will be forced to make a couple of moves at the deadline to bring in the scoring depth that this team needs, but I couldn’t help but wonder about some moves he didn’t make.

As I was preparing my game day preview for tomorrow evening’s game against the Boston Bruins, I couldn’t help but wax a bit nostalgic about what might have been had Ray Shero made a different decision during his first NHL Entry Draft. He held the second overall pick in the 2006 NHL Entry Draft in Vancouver. He had just inherited a team that was strong down the middle, had a decent blue line that was getting better and an up and coming goaltender. He seemed to have eyes for Erik Johnson, a stud defenseman from the US Developmental program, but he wasn’t the only one. The St. Louis Blues chose Johnson with the first overall pick leaving the Penguins to decide from a number of talented forwards.

I had the Penguins selecting Jordan Staal in my mock draft that season and as we all know that is how it played out. However, there was one guy sitting on the board who seemed to be exactly what the Penguins needed, a player that had a nose for the net and seemed to score at will. Some called him the United State’s answer to Sidney Crosby. Phil Kessel was a pure goal scorer, but though he was once rated the top prospect in the draft, a poor International tournament and a less than stellar college season helped his stock drop. There were also rumors of parental interference and even a feud with Sidney Crosby. Was it true? No one knows for sure. But all of the above convinced Shero and three of his peers to pass on the gifted forward.

Phil Kessel fell into the laps of the Boston Bruins, who were thrilled to select the former number one prospect in the five spot. He went through a couple of ho hum seasons there showing signs of what was on the horizon and is in the middle of a break out campaign.

Now hindsight is 20/20, but I ask you: Should the Penguins have selected Phil Kessel with the second overall pick in 2006. I say yes…and do so without any disrespect intended towards Jordan Staal, who is going to be a fine NHL player in his own right. It is just that Staal isn’t what the Penguins need most.
Staal is cut from the same swatch of cloth as Rod Brind’amour. He is a player who will knock in 20 + goals for his team, but is most effective in a shut down third line center type of role. Staal has been a great two way player for the Penguins and played a big role in their run to the Stanley Cup Final last season. However, they already have a player who could fill that role signed for several years at a bargain basement rate, Max Talbot.

Phil Kessel, who is also in his third season, would be so much more valuable to the Penguins at this stage of the game. He has already posted 22 goals this season and would look great skating on a line with a playmaker like Sidney Crosby.

Kessel has played 11 less games over the last three years than Jordan Staal, but has 13 more points. He also 123 more shots over that period and has averaged .55 ppg to Staal’s .46. Keep in mind that Staal’s totals are bolstered by his 29 goal rookie campaign, a total he not come close to matching again.

Here is a look at their career numbers side by side.

Kessel has shown throughout his career and at all levels that he eventually has the ability to score a large number of goals. Staal, on the other hand, has always been a great defensive player who possesses offensive upside. Staal’s OHL high for goals in a season was 28 while playing for Peterborough. While Kessel had back to back 52 goal seasons while playing with the US Developmental program, once doing it in 47 games.

Kessel currently ranks 18th in the NHL scoring race and fourth in goals and is in the middle of a coming out party, while Staal is tied for 131st.

The Penguins, if they had it to do over again, would be much better served in selecting Phil Kessel in 2006. They would have had the sniper that they currently lack and Jordan Staal wouldn’t be buried behind two world class centers in Evgeni Malkin and Sidney Crosby.

As I said above, this is no knock on Jordan Staal, as he and Kessel are two different players. Just a ride in the way back machine to consider how things could have been had the Penguins been willing to take a chance on a player that filled a need, rather than the best player available.

More tomorrow as the Penguins meet the Bruins at Mellon Arena…