The Penguins fall to the Bruins for the second time in two months in a very similar way… the Bruins four third period goals pushes them to a 4-2 victory in Pittsburgh. 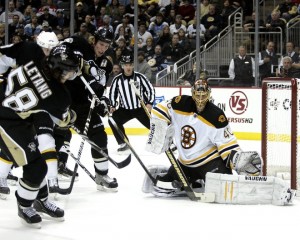 Two months ago to the day, the Penguins took the ice against the Boston Bruins and controlled the game for two periods only to watch it all slip away in the third period as they got away from their game plan. They allowed themselves to get lured into a run-and-gun game in which they came up on the wrong side of. That was again the case this evening, as they saw a 2-0 lead that they held for 55 minutes turn into a 4-2 defeat after again being lured out of their system.

Though the Birds had allowed the Bruins too many chances during the third period, they found themselves within 3:23 of closing out a Marc Andre Fleury shut out. Unfortunately for them that all changed when Zdeno Chara let a shot fly from the point during the power play that found its way past Fleury. It wasn’t the best goal that the he or his team has allowed, but the bottom line was that they still had the lead.

That lead lasted for exactly 12 seconds, as Brad Marchand found a way to get another puck past Fleury. Unfortunately, it looked as if MAF might get a handle on it, only to watch it kick away from him and to the blade of Marchand. The B’s center turned to his forehand and knocked it home for the equalizer…

Just when you thought it couldn’t get any worse for the Birds, former Penguin Mark Recchi got his blade on a bouncing puck in front of Marc Andre Fleury and directed it behind him giving the Bruins their first lead of the evening. Greg Campbell finished off the scoring for the B’s into an empty net and that was all she wrote.

The Penguins were obviously a pretty frustrated group in the locker room following the loss, their second such defeat to the Bruins in two months on their home ice.

Brooks Orpik, who was the first to field our questions in the room, was disappointed about the boarding call that came against him at 14:39 of the period. He didn’t completely agree with the call, but also realized that it was the one that got the Bruins going. His initial frustration was evident as we approached.

“Oh, we must have lost tonight,” said Orpik. “That is the only time you guys want to talk to me.”

No truer words have ever been spoken in that room, as he is one of the most candid players on the team and is always willing to tell it like it is.

The heads hung low and the brows furrowed as they all tried to come up with the reason why they allowed this one to get away from them.

“Yeah, but you know, it’s a 60 minute game and for whatever reason we let up at the end and they turned the game around and got two points,” said Zbynek Michalek. “It didn’t happen for the first time for us, it keeps happening and we need to do something about it. We need to learn to close out the games, especially these close games.”

That seemed to be the sentiment around the room, as everyone realized that they are finding themselves in this situation far too often as of late. The team is being lured out of its system on a regular basis and they are paying the price by losing points in the standings because of it.

“They put pressure on us, cause some trouble — I thought we were too loose in that regard, and a little bit too with our puck management,” said Dan Bylsma following his team’s third period collapse. They had some momentum going, which created some offensive zone time.

Hopefully this Bruins game can serve as a wake up call of sorts for this team, as it was universally looked at as the “rock bottom” point that sparked the team’s 12-game winning streak at the end of 2010. The team has looked just as inconsistent as it did back in late October and early November and this embarrassment could be just what the doctor ordered to get them back on track.

After outshooting the Bruins for much of the game, the Penguins finished on the wrong side of the ticker – 32-25.

The Penguins did outhit the Bruins 39-26.

The Penguins had 29 shots blocked and or miss the net. They missed shots largely worked against them as well, as many of them turned into break out opportunities for the Bruins.

Though he had struggled at times this season, Tuukka Rask played a fine game here tonight stopping 23 of 25 shots against.

Matt Cooke and Marc Savard took the same ice for the first time since a Cooke hit knocked Savard out last season. Though there were a few flare ups and some scrums, the tempers really never got to the boiling point.

Brooks Orpik chopped Savard to the ice behind the B’s net during the second period which caused a mild flare up that placed Savard and Kris Letang in the penalty box.