The Penguins have take a bit of a hit on the blue line in the form of injuries to Brooks Orpik and Zbynek Michalek. Those injuries have promoted the team to recall Andrew Hutchinson. 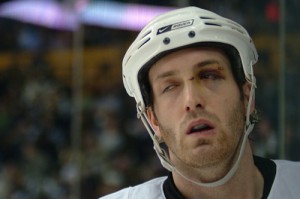 Though the Penguins finally picked up their first win of the season on Monday afternoon, knocking off the New Jersey Devils 3-1, it came at a cost. First, Brooks Orpik was a surprise scratch after suffering a pulled groin during practice on Sunday. Some reports alluded to the fact that it could actually have been an abdominal injury/setback from the surgery that Orpik had to repair a hernia earlier this summer. The team then lost Zbynek Michalek to an apparent upper body injury.

Michalek took an awkward check along the boards from New Jersery’s Rod Pelley. In looking at the play it looked as if Michalek was favoring his arm or wrist, though some have speculated that it could be a shoulder. The play was eerily similar to the one in which Sergei Gonchar broke his wrist last season after taking a check from St. Louis’ David Backes.

Both Ben Lovejoy and Deryk Engelland were pressed into action yesterday based on the injury to Orpik and now the team has been forced to make a recall due to the injury to Michalek.

Andrew Hutchinson, who was one of the final cuts of training camp has been recalled to offer support to the depleted blue line.

Hutchinson (6-foot-2, 195 pounds) helped the Texas Stars earn a berth in the Calder Cup Final last season, chipping in five goals and 16 assists in 21 playoff games. He won the Calder Cup with Milwaukee in 2004.

The Evanston, Illinois native won the AHL’s Eddie Shore Award as defenseman of the year after posting 18 goals and 64 points with Hartford in 2007-08. Hutchinson’s 46 assists and 64 points were the most in the league by a blueliner, while his 18 goals ranked third.

Hutchinson, who was originally drafted by Nashville in the second round (54th overall) of the 1999 Entry Draft, played four seasons of collegiate hockey with Michigan State. He also represented the United States at the 2007 World Championships in Russia.

Both Orpik and Michalek were set to be re-evaluated in Pittsburgh Tuesday afternoon. Updates will likely be available tomorrow morning when the Penguins take the ice at the CONSOL Energy Center prior to their 7:30pm match-up with the Toronto Maple Leafs.