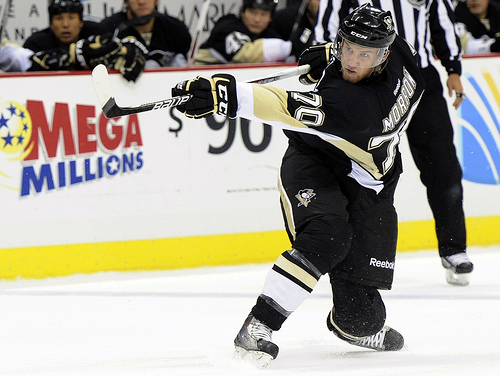 Penguins recall Joe Morrow, as their defensive depth is challenged.

What once looked like a logjam of sorts is now a possible area of concern, as the Penguins’ once full blue line is now seeing its depth tested.

The prevailing sentiment was that they would likely have to consider possible upgrades, especially at the bottom end of the NHL depth chart, but they had plenty of bodies to fill their five, six and even seventh spots. Their depth was such that they actually decided to keep eight defensemen on the roster coming out of the lockout.

Since that time, the team has lost Brian Strait via waivers, Ben Lovejoy in a trade with the Anaheim Ducks, Matt Niskanen and Kris Letang to injuries. They have had to recall local boy Dylan Reese and former first round pick Joe Morrow to offset the losses.

They didn’t seem to miss a beat as Reese joined the line-up on Thursday evening, picking up a dominant 5-2 victory over the Washington Capitals, but went on to lose 3-1 to the New Jersey Devils on Saturday afternoon. That likely had a lot more to do with taking 12 minor penalties in the game and having to kill off a number of power plays, but the question still lingers – can they survive?

The Penguins should be able to weather this storm, but it isn’t something that they can afford to have linger on indefinitely.

Reese was effective in his first two games, but he has only skated in 76-games since being drafted in 2009, the bulk of which came with the New York Islanders. Can he continue to contribute for a long stretch of games when he has never played more than 28 NHL games in a season?

Of bigger concern is going to be the performance of Joe Morrow. Yes, many have been clamoring for his arrival in Pittsburgh since his effective training camp two seasons ago, but he just doesn’t seem to be ready for the league yet.

Morrow is in just his first pro-season after finishing off four strong seasons with the Portland Winterhawks that culminated with his being named a WHL first-team All-Star after ranking second among all WHL defensemen with 64 points (17G) in 62 regular season games.

The Edmonton, Alberta native has yet to find consistency in his game at the AHL level, so it is going to be a challenge for him to step in and play effective minutes in the NHL. Known for his offensive acumen, he has posted just 10 points (two goals) in 39 games this season for the Wilkes-Barre/Scranton Penguins.

It is not yet known if Morrow will make his NHL debut when the Penguins meet the Devils this evening, but all eyes will be on the situation. If he gets the call, his performance will go a long way towards letting general manager Ray Shero know if he does indeed need to look for external options for his blue line.

The Penguins placed defenseman Kris Letang on retroactive injured reserve. The move is largely a paper one to open a roster spot for the recall of Joe Morrow.

Entering yesterday the Penguins were the second least penalized team in the league, after posting 29 minutes against the Devils they jumped to tenth with 146 minutes. (Four majors)

Former Penguin Ben Lovejoy made his debut with the Anaheim Ducks Friday and was in the line-up again on Saturday. He has registered a minus-one and fired five shots on goal. He has gotten some time on the power play and is averaging roughly 16:30 per night with the team.