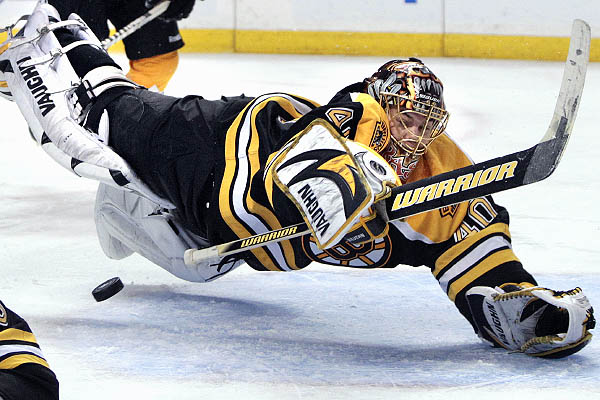 Patrick Hoffman takes a look at the top netminders to this point in the NHL season.

In a shortened season like the one NHL is going through now, it is important that the team gets the goaltending they need to win hockey games.

Through the first few weeks of the season, several masked men have stepped up in big ways and have helped their team gain valuable points in the standings. These goaltenders know that every game means something and their strong play in the early going has put their teams in stable positions in their respective conferences.

With that in mind, here are who I think have been the league’s best goaltenders so far:

More often than not, Ottawa Senators’ goaltender Craig Anderson has not gotten the credit he deserves wherever he has played.

More importantly, Anderson is keeping his teams in every hockey game by stopping the shots he should stop and then giving a second effort if needed to make a save on the rebound. His play is a big reason why the Senators are in the top five in the Eastern Conference.

Going into the season, many hockey pundits and fans alike thought that goaltender Roberto Luongo was finished in Vancouver and would be on another team by now and that Cory Schneider would be the main man between the pipes.

Obviously, there is still a chance that Canucks’ general manager Mike Gillis might still move the 33-year-old All-Star netminder but for right now at least, Luongo is giving the Canucks everything they need between the pipes and in the end that is all that should matter.

When the Montreal Canadiens’ traded Jaroslav Halak after his great performance in the 2010 postseason, it was then that Carey Price became what he was meant to be for the Habs: the team’s true number one goaltender.

Ever since the trade, Price has been a different goaltender and this season, he is more than just at the top of his game. Price is 6-2 with a 1.74 GAA (fourth in the league) and a .936 save percentage (fifth in the league).

Thanks to Price’s strong play, the Canadiens find themselves near the top of the Northeast Division and in one of the top eight spots in what is already a very competitive and tight Eastern Conference.

When the Boston Bruins found out this summer that goaltender Tim Thomas was taking the year off, there was no need for panic because they had the next best goaltender in Tuukka Rask.

Rask has not disappointed as his play as the Bruins’ first in the Northeast Division and second in the Eastern Conference (as of this writing). In eight games, Rask is 6-1-1 with a 1.96 GAA (seventh in the league), a .922 save percentage (12th in the league) and one shutout.

Between the pipes, Rask plays with a lot of confidence, has excellent recover skills and can be relied on to stop both first and second shots if need be.

Last season was quite a rollercoaster for Chicago Blackhawks’ goaltender Corey Crawford as he struggled with inconsistent play.

Crawford is singing a different tune these days as his strong play between the pipes has made the Blackhawks one of the best teams in the NHL this season. In eight games this season, Crawford is 6-0-2 with a 1.82 GAA (sixth in the league) and a .930 save percentage (seventh in the league).

If Crawford keeps up his strong play and the rest of his teammates follow suit, the Blackhawks could be a very dangerous team come playoff time.

On top of his work for FromThePoint.com, Patrick covers the New York Rangers for Kukla’s Korner and the NHL for Sportsnet.ca.

Prior to writing for the above-mentioned outlets, Hoffman’s musings have been published on NHL Network Radio, the Red Light District Hockey Blog, TheHockeyNews.com, The Fourth Period, Spector’s Hockey, Hokeja Vestnesis, Blueshirt Bulletin, SNYRangersBlog.com, as well as a slew of others.

For comments and hip checks, feel free to contact Patrick at patrickhoffman3530@gmail.com or on Twitter at @pathoffman35.