The Penguins have signed former second round draft pick Richard Park to a one-year deal. 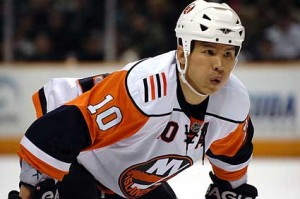 As the Penguins headed into the free agent frenzy this summer all of the talk focused on the fact that they might re-sign a former player. A guy who was drafted by the team back in the early 90’s, but hadn’t skated in the Burgh in a decade. Though the courtship was rocky and dragged on for several months, they finally got their man – Richard Park.

Who did you think I was talking about?? Jagr?

According to a tweet that the team sent this morning the Penguins have re-signed Park, who last skated with the team during the 96-97 season, to a one-year contract.

Park, 35, was drafted by the Penguins with the 50th pick in the 1994 NHL Entry Draft and he has played parts of 13 NHL seasons, appearing in 684 regular-season games with Pittsburgh, Anaheim, Philadelphia, Minnesota, Vancouver and the NY Islanders, notching 95 goals, 132 assists and 227 points. Park has added eight points (3G-5A) in 38 postseason contests.

He spent last season skating with Geneve Servette of the Swiss National League where he tallied 34 points (15G-19A) in 47 games.

Park is probably best known for his solid penalty killing and has notched 14 career shorthanded goals, including a career-high four in ’07-08.

As a rookie back in 95-96, Park played an important role for a Penguins’ team that went on to the Eastern Conference Finals.

During his most recent NHL season with the New York Islanders in 2009-10, Park established a career-high with 22 assists and tied the second-highest point total (31) of his career in 81 contests. Park tallied 10-plus goals and 30-plus points in three of his four seasons with New York prior to heading to Switzerland.

When the 5-foot-11, 190-pound Park made his NHL debut with Pittsburgh on May 3, 1995, he became just the second South Korean-born player to appear in the NHL, joining former Penguins defenseman Jim Paek.