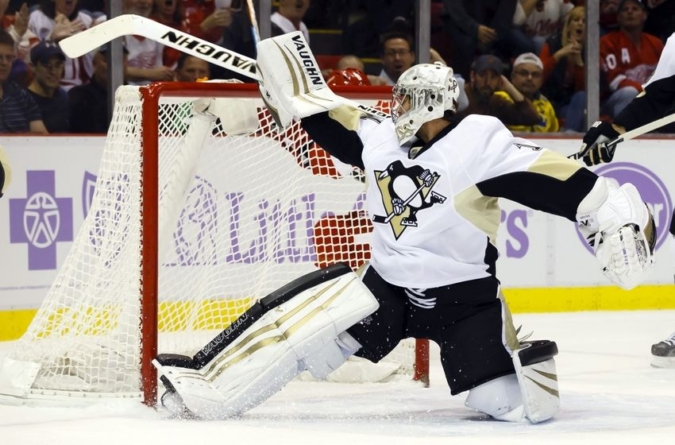 The Penguins have already lost two of their unrestricted free agents to division rivals. Defenseman Taylor Chorney and goaltender Thomas Greiss have signed with the Washington Capitals and New York Islanders respectively.

Chorney, who helped quite a bit down the stretch while the Penguins dealt with injuries to Kris Letang and Christian Ehrhoff, was held in high esteem by the team and they hoped to keep him around. Unfortunately there just didn’t seem to be a roster spot in the NHL available for him.

The NHL depth chart, barring a trade of course, is stacking up as such: Kris Letang, Olli Maatta, Derrick Pouliot, Ian Cole, Ben Lovejoy, and Rob Scuderi. Brian Dumoulin and Scott Harrington were expected to compete for jobs as well. There simply wasn’t enough to incentive for Chorney to wait around when he could get a one-way NHL deal with the Capitals.

Greiss never really seemed to fit in here in Pittsburgh after signing a one-year/$1 million dollar contract with the club last summer. He showed a penchant for allowing late goals and several times, albeit not always on his own, cost himself victories.

His less than spectacular season in Pittsburgh also saw him contract the mumps. He finished his Penguins career with a 9-6-3 record with a 2.59 goals against average and a .908 save percentage.

He’ll get two-years/$3 million dollars with the Islanders.

Paul Martin, who was always among the biggest minute munchers on the Penguins blue line over the past five seasons, has moved on to the San Jose Sharks.

There were some who thought he and the Penguins could be trying to find a way for him to return, but it never really made sense. There just didn’t seem to be a way to make it work in terms of years or salary that would work for the team and the player.

Martin gets a four-year deal with the Sharks.

The 34-year-old established himself as a solid, all-around defenseman during his tenure in Pittsburgh. He dealt with his share of injuries, specifically during the 2013-14, rebounded by rolling up 20 points in 74 games while averaging 22:47 per night. He was even more valuable during the playoffs where he averaged 24:36 per night.

Always a class act, he will be missed on and off the ice.

Blake Comeau joined the Penguins last summer on a one-year/$700,000 dollar deal that he far surpassed while at times skating on the team’s second line alongside Evgeni Malkin.

He rolled up 16 goals, 15 assists and 31 points in 61 games and would likely have set career highs in all categories if not for missing 20 games with a broken wrist. Though he returned, he never looked like the same player based on not having the same strength in his wrist that he did prior to the injury.

Comeau is a well-rounded player who is capable of chipping in offensively as well as killing penalties.

He gets three-years/$7.2 million dollars, with an AAV of $2.4 million per season. Very nice raise and security for him.