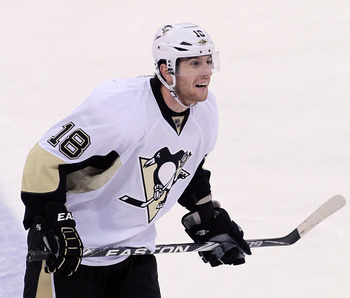 One of the biggest headaches that loomed on the horizon for Penguins’ General Manager Ray Shero was getting James Neal extended before he hit restricted free agency. Some thought that it was going to be easier said than done, possibly even a tough negotiation. You could hear the telltale sound of a cash register’s “cha ching” with each and every one of the 30-goals that Neal has scored thus far on the season.

Shero, as he always does, clearly had the ball rolling on a plan that would lock his sniper up long term, as the team announced that Neal had agreed to a six-year contract extension this morning. The best thing about the deal is that it works out to a cap friendly $5 million per season, which when compared to the likes of some exorbitant contracts around the league, is a steal for a guy who is capable of scoring 40-goals each each year and is still just 24-years-old.

Neal has been deadly from the face-off dots in this season and has developed unbelievable chemistry with Evgeni Malkin, who is leading the NHL is scoring to this point in the season. He has an amazing release on a wrist shot that seems to catch goaltenders off guard more times than not. He has set career highs in goals (30), points (56), power-play goals (13) and shots on goal (242) and those totals all grow by the game.

#Pens GM Shero: As we’ve gotten to know Neal over past year, he really fits w our group, really difficult to find players like this -SK

#Pens GM Shero: Neal has size, uncanny release, heavy shot, goes to net hard, can skate. Lot to like even beyond the 30 goals -SK

Shero’s work is far from over as both Sidney Crosby and Jordan Staal are looking at contract extensions this season, but getting Neal locked up is a huge step towards keeping the band together.

James Neal and the Penguins take on the Buffalo Sabres at 12:30pm as part of Hockey Day in America.