The Penguins have re-assigned forward Eric Tangradi and defenseman Andrew Hutchinson to their Wilkes Barre-Scranton affiliate. 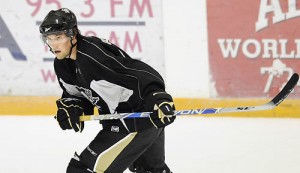 The Penguins announced a couple of personnel moves this morning and they might not be the most popular with the team’s fan base.

Eric Tangradi and Andrew Hutchinson have been re-assigned to the Penguins AHL affiliate in Wilkes Barre-Scranton. Hutchinson might not make many flinch, but a large contingent of fans have fallen hard for the Tangradi, who is one of the team’s top prospects.

The moves signal that several wounded birds, Aaron Asham and Zbynek Michalek, are close to making their returns to the line-up. Both have been skating with the team for close to a week and traveled with the group on its current three game road trip.

Tangradi had been playing an average of 11:55 per game, but had picked up just 2 points (1G-1A) in 9 games this season. The emergence of Mark Letestu, who has 7 points (4G-3A) in 9 games, made this decision for the team. He would have to clear waivers if re-assigned, while Tangradi would not.

How long this demotion will last is anyone’s guess, however I am sure we haven’t see the last of the young power forward this season.

Here is the official release from the team:

The Pittsburgh Penguins have re-assigned left wing Eric Tangradi and defenseman Andrew Hutchinson to Wilkes-Barre/Scranton of the American Hockey League, it was announced today by executive vice president and general manager Ray Shero.

The Penguins finish a three-game road trip against the Tampa Bay Lightning Wednesday at 7:30 p.m. at the St. Pete Times Forum.