Though it looked like the Boston Bruins had the inside track on acquiring the Calgary Flames captain, general manager Ray Shero was able to finalize a deal during the small hours of Thursday morning.

According to Calgary GM Jay Feaster, Iginla will meet the press in Calgary tomorrow morning before heading to Pittsburgh.

For those keeping score at home, Shero has now acquired Brenden Morrow, Douglas Murray and Iginla without subtracting a player from his NHL roster. In that trio he gets leadership, toughness, sandpaper and skill.

Morrow and Iginla were their respective team’s captains before OKing trades to Pittsburgh.

Now coach Dan Bylsma gets the pleasure/headache of trying to figure out how to plug and play this line-up. I am sure that it is a challenge that he is looking forward to, but how do you juggle that top six? Especially with Evgeni Malkin rejoining the team as soon as tonight when they hit the ice against the Winnipeg Jets.

Ben Hankowski is playing out his senior season at St. Cloud State, where he and his team are set to open the NCAA tournament on Saturday night. The former 2009 third round draft pick has logged 29 points (16G) this season.

Kenny Agostino is currently playing at Yale, where he has logged 37 points (15G) this season. He and the Bulldogs will also be opening the NCAA tournament this weekend.

Here is more on the two prospects dealt to Calgary from Wilkes-Barre/Scranton Penguins beat reporter Jonathan Bombulie: (click through to read even more)

I don’t consider myself an expert on college hockey by any means, but I’ve had enough conversations with Penguins management about Kenny Agostino (left) and Ben Hanowski (right) over the last couple of years to at least give a brief overview of what the Penguins gave up to get Jarome Iginla.

Overall, I’d say both are very good college players, but neither is among the top 10 prospects in the organization.

Jay Feaster, Calgary Flames GM, met with the media early this morning to give the details of the Jarome Iginla deal. You can watch it here:

Stay tuned, as we will be updating this throughout the day.

Shero, in an answer that I wasn’t able to transcribe quickly enough as he was saying it, fully credits ownership with not only allowing him to make this Iginla trade, but with sticking with the process of being patient prior to his arrival. Getting Malkin, Crosby and others, building a winner and building an attractive situation that has the ability to lure players like Iginla, Morrow, Murray etc to Pittsburgh.

Shero says that Iginla has been a target. He let his interest be known and when it appeared obvious that Iginla would be on the move, he contacted Feaster and started discussing the components.

Shero thanked Iginla for waiving his clause to come to Pittsburgh. Said that he had several options and he chose Pittsburgh.

“There has never been a conversation where these guys have asked ‘who am I going to play with?’ they just want to do whatever they can to help the team.”

There was a moment yesterday in which Shero thought this wouldn’t happen. He told his group that they were probably out of the mix, but then it “came back around.”

Shero called to tell his kids that he had acquired Iginla and they said, “No you didn’t, we’re watching on TV, he’s going somewhere else.” He told them, “No, I’m pretty sure we’re getting him!” which earned laughter in the room.

He was comfortable moving his first round pick because they were able to select two players in the first round last season. They also feel that they got two pretty good players, which allowed them the flexibility.

“It’s a credit to our scouting staff that they were able to select these guys (Hanowski/Agostino) and turn them into assets.”

“These are two guys that we were planning to turn pro.”

“Our prospect pool was probably deeper than it’s ever been.”

“We are not in any jeopardy of losing players to waivers. We have to make some decisions with guys, but they will be back after we can expand our rosters. Those players understand and are part of this team.”

Iginla will not be a part of the 23 man roster until he clears immigration and gets a visa situation worked out. They will be able to expand their roster beyond 23 next Wednesday once the deadline passes.

On Iginla’s role and his desire to be in Pittsburgh:

“I haven’t spoken to him yet.”

“There’s been discussions about the possibility of adding Jarome to our line-up for a number days.”

“Jarome chose to come to Pittsburgh and he did that obviously knowing our team and our lines and our power play, so that’s the exciting thing about that. Where he plays? I’m not too concerned with that right now. Once he gets here, we’ll discuss and determine where he is going to fit and where he’s going to play.”

Talked about viewing the current new additions as very similar to adding Guerin, Adams, Kunitz etc over the years. They all played big roles for teams over the years but integrated themselves in a way that worked. The same thing will happen with these guys as they want to contribute in anyway possible. “We’ve had guys who were captains…”

Said that you will at times see Iginla on the right side of Sidney Crosby. Different circumstances and moments could dictate that, but you will also see Sid playing with his current linemates.

In regard to dealing with guys who may be re-assigned or see jobs jeopardized by acquisitions.

“I think we’ve already experienced that a little bit with the first acquisition of Brenden then again with Douglas… most players probably woke up to some texts and something that they didn’t know about. They probably went to sleep thinking Jarome was on his way to Boston.”

“I look forward to it.” — the challenge of working the lineup out and finding the right mix. Building this group into a team over the next 14 games.

Situations and player comfort level will go into in game adjustments, but he has a number options in terms of how he deploys these players.

Sid, Jarome, Brenden have all played together in tournament settings etc. There is a familiarity there.

“I like that the players who are here are choosing to come because they want a chance to win.”

According to multiple reports and tweets, Calgary preferred the Boston offer, but didn’t have approval from player to send him there. Iginla chose Pittsburgh. Pro Hockey Talk has more.

The Bruins actually made the stronger offer for Iginla in the Flames’ eyes, according to TSN’s Bob McKenzie. However Iginla, who needed to approve any trade, ultimately decided that he would rather play for the Pittsburgh Penguins. 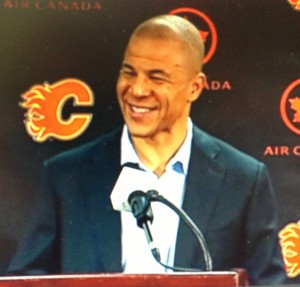 Jarome Iginla will meet the press in Calgary in a few minutes. Stay tuned.

“I don’t know if you prepare a speech for this, I mean I’m not retiring right…”

“He did come to me probably around a month ago and we talked about the idea of if we weren’t in a playoff position making a move…. possibly a small rebuild or retooling.”

“The final go ahead I guess was yesterday. We have kept in touch, talked with my agent… we gave a list of a few different teams…. I didn’t know when it would happen.”

“I talked to Donny Meehan… by the time I had gotten up, he and Jay had already spoken about a couple places. Three teams were making pitches.”

“I look back and I wish I would have known it was my last one…” in regard to his final game in a Flames jersey.

“On the last day… I was told who the teams were who were making pitches. I wanted it to be a mutual thing, a deal that they were happy with, but at the end of the day I wanted the best chance to win.”

“To go and play on a team with the two best players in the world, the roll that they have been on. I wanted a chance to be a part of that and I am glad that they gave me that opportunity.”

“Pittsburgh is a great organization and they are really rolling. They have the two best players in the world in Sidney Crosby and Evgeni Malkin, I look forward to scoring and trying to find a way to help them win.”

“I don’t know the players in the deal, but I hope that they light it up here.”

“I wasn’t sure. I did talk to Donny who was talking to Jay regularly. I was reading the stuff too. I wasn’t fully sure what was going on, but I knew that Pittsburgh was in the mix with Boston. They are both amazing cities and amazing organizations. When it came down to the choice that I had, it is really hard to pass up a chance to play on a team with Sid and Malkin and the roll that they are on…”

“Fortunately I had a choice, but it wasn’t fully my choice. I wanted it to be mutual, but once they told me that they were comfortable with where things were [with Pittsburgh], I was happy.”

“I don’t know where I’ll be playing, really, after this year right. Calgary has really become home.”

“I love competing. I love playing the game. I’ve had fun. It’s been a lot of fun. I hope to play for a while longer and to win a Cup, but it has been great….. when I talk like this it sounds like I’m retiring. Again, I’m not retiring… ” more laughs.

“Just looking forward to getting to Pit and to get focused again on playing hockey. It’s only been a couple days, but it feels like a lot longer. This isn’t routine for what we are used too so I look forward to getting back on the ice and getting into that dressing room.”

“When I go there I am not sure what my role will be and I am fine with that. I am viewing it like going to a Team Canada or something like that. You go and do what the coach tells you, in any role and any situation. That is the only situation I can compare it to.”

“I’m not sure what the timeline is ok. I was just counting on going home and packing my bag, but now I have to wait… ” Immigration issues… should be resolved quickly.

“Each year that goes by you definitely feel a bit more urgency there…” — in terms of winning the Cup.

Iginla will miss the “Battle of Alberta.” “Won’t be the same going in there not playing for the rival Flames.”

“My wife is literally in Hawaii” — attending a reunion with her family. Was a bit stressful going through situation yesterday alone. “They’re excited about it and are ready for a new challenge.”

Iginla ends the conference by receiving an ovation from the gathered media. Pretty awesome moment. He seemed to get a bit emotional. As he was leaving the podium — “Thank you all for coming, I appreciate it. I wish the Flames the best.”

Tweet from the Calgary Flames to the Pittsburgh Penguins:

@NHLFlames @penguins You now have another living legend in your midst. Take care of our captain. Signed, Calgary. #ThankYouIggy