The pinnacle of the sport is the silver chalice that is won every summer. Lord Stanley hasn’t called Canada home for over a decade and a half now, as the Montreal Canadiens were the last team from the hockey-driven country to win the Cup… way back in 1993. 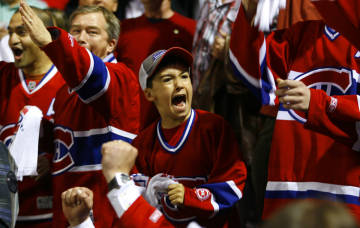 North of the border, Sidney Crosby’s golden goal in February’s Olympics will last a lifetime. I mean, why not? It was the biggest stage hockey has been on in quite some time, with the Olympics being held in an NHL city. It was also deemed as the biggest game in the nation’s history, when they defeated the U.S. for gold.

With that being said, the pinnacle of the sport is the silver chalice that is won every summer. Lord Stanley hasn’t called Canada home for over a decade and a half now, as the Montreal Canadiens were the last team from the hockey-driven country to win the Cup… way back in 1993.

It has been 17 years, to be exact, since the Cup has been won by a Canadian team. And since the Habs’ glory in ’93, only four Canadian teams have even made it the finals. Vancouver, Calgary, and Edmonton all pushed their respective Cup final series to seven games, but lost; the Senators were quickly put away in five by Anaheim in 2007.

Before 1993, the Cup was won by a Canadian club 7 times in the 9 years prior – a mixture of Edmonton, Calgary, and Montreal. It is the longest drought the country has endured between Cup titles. The Canucks and Senators have yet to lift the Holy Grail, while it’s been 42 years (1967) since the Maple Leafs last won.

Why is it so hard for these six teams to breakthrough and win Lord Stanley? Is it the added pressure from each individual fan base? You know the fans of each fan base expect their team to go deep in the playoffs every year.

Is it the Canadian dollar keeping key free agents from traveling north of the border (or running them out of town)? We’ve seen players in the past opt to sign with one of the 24 teams in the States, instead, over a team from Canada.

Or are these franchises simply a victim of having poor management at times during this drought? The Oilers and Leafs haven’t drafted and developed well in some time, and are currently on the rebuilding road.

I think the infinite amount of pressure on each Canadian team has a big role in this. To me, Montreal is a perfect example. Last year, they let the likes of Saku Koivu, Alex Kovalev, and Alex Tanguay walk away in free agency. Instead of saving money for the big prize this summer, Ilya Kovalchuk, ex-GM Bob Gainey threw a lot of coin at Mike Cammalleri, Brian Gionta, and Scott Gomez (trade).

It’s no knock on those three, as all were a part of Montreal’s deep run this spring; but you can safely say Gainey was under pressure to keep the Habs in the playoff mix (and keep his job), instead of thinking ahead and restocking the right way.

Also, the pressure of playing in a media-crazed city like Toronto or Montreal can be a turn-off for free agents. The pressure has gotten to Carey Price in his short time with the Habs, while Brian Burke should get a medal or prize for putting up with the Toronto media! Why play in those two cities when you can live your own life in another market where everything you do is scrutinized?

Then there are the conspiracies! Some Canucks fans believe the NHL was working against them this postseason. Same with a number of Flames fans in 2004, who still think Martin Gelinas’ potential Cup-winning goal against Tampa Bay in Game 6 shouldn’t have been disallowed. But these ‘theories’ aren’t real, even though some Canadians may believe they are.

Looking ahead to the next year or two… do any of these teams have a chance to break this drought? Toronto and Edmonton are still years away from being true contenders. Calgary and Ottawa are kind of stuck in neutral, not in a position to make a run at it. Montreal had a great postseason this year, but I have a hunch that this was a mirage and they’ll again struggle to make the playoffs next year.

So the only team currently in position to do so is Vancouver… but they may not be built for a deep playoff run just yet (as this postseason proved), and Roberto Luongo’s struggles are well-documented. GM Mike Gillis is a couple pieces away from making his Canucks a true Cup contender.

17 years is a long time, but I’m sure it feels like an eternity to Canadians since one of their teams has lifted the Stanley Cup. I’m not sure any of the six teams will keep the drought from reaching 18, but each will try to get back on track to end this thing a year from now.