Tallon was promoted to the top perch with the Blackhawks back in 2005. He immediately started to get things back on track in the Windy City…

(Editor’s note: Please welcome Ryan Porth to the FTP family. Ryan has been blogging about the NHL since 2008 and is the editor-in-chief over at the Red Light District Hockey Blog. I am excited to add this talented young man to the team. I hope you enjoy his first piece as much as I did…) 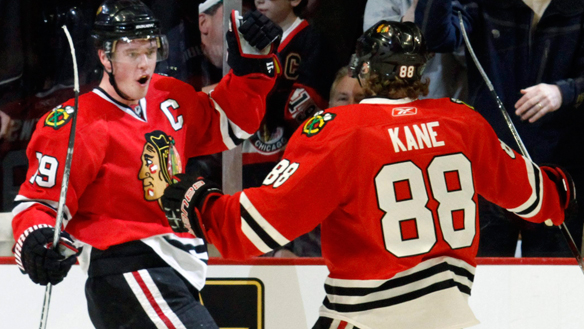 Last week, the Florida Panthers hired ex-Blackhawks GM Dale Tallon to replace Randy Sexton to the same position. The Panthers organization, absent from the postseason since who-knows-when (2000), scored a hat trick with this addition to the front office. In Sunrise, Tallon will look to change the landscape just like he did with the team he was previously calling the shots with – where they’ll benefit from his mastery for years to come.

Tallon was promoted from assistant general manager to the top perch with the Blackhawks back in 2005. He immediately started to get things back on track in the Windy City, even though the results didn’t follow right away. With the horrid losing seasons piling up, you knew they would eventually breakthrough with all of the high draft picks. Two, in particular, turned the whole franchise around.

In the summers of 2006 and 2007, Tallon drafted the new faces of Blackhawk Hockey. Jonathan Toews and Patrick Kane were both selected within the top three picks of those two drafts. It didn’t take long for them to experience success at the NHL level. Three years into their young careers, they’ve put hockey back on the map in Chi-town and have taken the city by storm with their dazzling talent.

Tallon wasn’t scared to take a risk during the annual Free Agent Frenzy, a day where some GM’s (cough, Glen Sather, cough) can hamstring their teams salary cap wise for years to come. Tallon did fall under this trap, too, but the moves he made have paid dividends in their own right.

Since becoming GM after the lockout, Tallon added the likes of Nikolai Khabibulin, Martin Havlat, Brian Campbell, and Marian Hossa via free agency (I won’t mention Huet). The former two were key cogs in the Hawks’ conference final push last spring, while the latter two are currently helping the team try to get through San Jose to get into the finals.

Tallon also made two under-the-radar trades (at the time) to help build Chicago into a contender. During the 2005-06 season, he acquired Patrick Sharp from Philadelphia… which was a downright steal. Sharp has only gotten better in his time with the ‘Hawks, becoming a legitimate 30-goal threat and a great all-around presence up front.

The next season, Chicago traded for Kris Versteeg. Acquired from Boston for Brandon Bochenski (yes, that Brandon Bochenski), Versteeg has also made Tallon look really smart. He’s been an important role player in the last two seasons, compiling 97 points in that time.

Another key player he brought in rather quietly was goaltender Antti Niemi. Tallon inked the Finnish standout as an undrafted free agent in 2008. That move has paid off big-time, as Niemi has emerged as the team’s number one netminder in his first full NHL season.

While Tallon’s time in Chicago may be tainted because of the fiasco he caused last summer with the RFA’s (and his firing in favor of the Bowman clan), he should be remembered for being the architect of one of the best turnarounds in NHL history. At the start of this 2009/10 campaign, everyone on the roster was either drafted/traded/signed by Tallon. That’s the kind of team he built from scratch.

If the Blackhawks end up winning the Stanley Cup next month, Tallon should receive a ring, as a thank you from the organization, for putting it all together from the ground up – something he’ll now attempt to do with the Panthers.