Dan Scifo chimes in with his weekly column… this time he breaks down the team’s early issues with consistency.

Just when the Pittsburgh Penguins seem to be heading in the right direction, they take a step backwards.
It’s been a continuous punch and a counterpunch this season for the Penguins, appropriate considering four players, including captain Sidney Crosby, received five-minute majors for fighting during Wednesday’s frustrating 5-2 loss to the Dallas Stars. 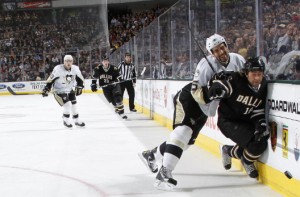 The Penguins went from one extreme to the other in consecutive games, playing arguably their best of the season in a 3-0 win at Carolina, followed by what could be considered as possibly their worst Wednesday at Dallas.
The Stars outworked the Penguins from the outset, taking a 2-0 lead and holding a 12-4 advantage in shots after one period.
It’s not a new issue for the Penguins’ as head coach Dan Bylsma has reiterated in the past how important it is for his team to get off to a quick start.
“I think, in order to win hockey games and to be a good team, there has to be a certain level of execution that’s necessary,” Bylsma said. “If you don’t have it, you can’t expect to be a good team and you can’t expect to win.”
The Penguins have actually outscored their opponents in the first period, but are 2-5-1 when the opposition scores the first goal.
The power play certainly hasn’t helped matters this season either. It’s been more like a power outage.
The Penguins haven’t scored a power play goal in six straight games, which amounts to an 0-for-27 slide.
Pittsburgh has gone 2-3-1 in those six games without a power play goal, compared to the 4-1-0 mark the Penguins sported from Oct. 11 to Oct. 18 when they scored with the man advantage in five consecutive games.
To make matters worse, the Penguins couldn’t score in four chances with the man advantage Wednesday night against Dallas, which features the NHL’s worst penalty-killing unit.
A key moment in the first period of Wednesday night’s game told the story and highlighted the power play unit’s struggles as the Penguins, trailing 2-0, only generated two shots and failed to score during a two-man advantage that lasted 1:37.
It was a golden opportunity to crawl back into the game that saw the Stars jump on the lifeless Penguins from the start scoring two goals in the first eight minutes of the game.
An 0-for-27-and-counting slide is unacceptable on a team featuring the likes of superstars Crosby and Evgeni Malkin.
But this isn’t the first time the power play has been called into question.
The same unit experienced similar struggles all throughout last season, including a late regular-season 4-for-38 slump in nine games and an 0-for-14 slide, snapped on Malkin’s overtime game-winner against Florida.
Even if the Penguins notch a power-play goal, or two, in the coming games, the spotlight will still be focused on this unit. They will have to consistently display the ability to put the puck in the back of the net with the man advantage and avoid falling into lengthy, listless slumps, similar to the one they’re currently riding.
Inconsistency has also plagued Penguins’ goaltender Marc-Andre Fleury, who is expected to get the start tonight at Anaheim.
The Penguins are desperately waiting for Fleury to break out of his early-season slump as the former Stanley Cup champion has struggled, going 1-5-0 with a 3.35 goals-against-average and a .863 save percentage.
Fleury is one win away from becoming the seventh-youngest goaltender in league history to reach 150 wins. For now, the Penguins are just looking for him to get into a groove and breath some life into an inconsistent team.
Backup Brent Johnson came down to earth Wednesday night after a blistering 5-0-1 start to the season. Johnson, who came into the game ranked second in the league with a 1.16 goals-against average and a .960 save percentage, stopped 24 of the 29 shots he faced during the Penguins’ first loss to Dallas since 2003.
To his credit, Johnson didn’t get much help from his defense and one of the five goals came on a penalty shot, but it opens the door for Fleury possibly step in.
Similar to the power play however, Fleury must show that he can string together several wins and solid performances to ensure a nightly spot between the post. If not, Johnson will continue to see increased playing time.
The problems don’t just stem with Fleury though. Multiple areas of inconsistencies are the primary issues plaguing the Penguins at the moment.
If they can get their consistency issues squared away and begin playing to their potential, they should return to the upper-echelon of the Eastern Conference.
If not, the Penguins will continue to struggle.