Jim Butler is back with another dose of his Saturday Morning Coffee… get his take on Ryan Whitney, Phil Kessel, Deryk Engelland, Finnish hockey players and much, much more!

The Red Wings very rarely make a mistake; Ville Leino looks to be one of those mistakes.

It’s never smart to write off the Devils and Brodeur but what a horrid start, to be honest I like seeing Lou squirm.

The #1 Halloween costume in Dallas this year? Going as an empty seat at the Dallas Stars game.

Would the Pens be better if they traded Malkin for some very solid depth? I’m not sure but an interesting topic none the less.

Put away the orange pylons, the parade route in Toronto has just been cancelled.

The Flyers are talking contract with Jeff Carter, talk about a polarizing figure for the Flyer fans, it seems Flyer fans either love or hate him.

Instead of accepting a gift for game #1000 Craig Conroy donated  $25,000 to charity, that is what makes hockey players  different then other athletes……………………pure class right there.

Tobias Enstrom, if you don’t know you should.

Bring out those orange pylons again; Dion Phaneuf is back on the ice again.

When did Deryk Engelland become Clubber Lang, I might pity the fool that tangles with dude!

The Islanders did the right thing and sent down their 1st round pick, some say he should have stayed up. I find both opinions Niederreiter wrong.

I can think of a lot of words to describe Phil Kessel, handsome isn’t one of them. 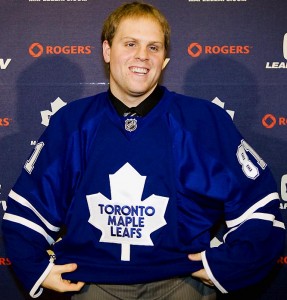 I love Finnish hockey players names…you can’t beat Jussi, Olli and Pekka. Well you can beat them on the ice just not the name game.

Pretty cool story about the hockey skate with a Manitoba and Philadelphia connection. I have to thank my Dad for the link http://www.manitobasburiedhistory.com/?page_id=31

Ryan Whitney getting his Paul Coffey on, damn fine start for him.

Have a great weekend Hooligans.