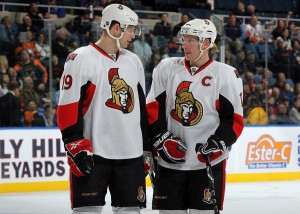 The predictions for the Ottawa Senators (by credible sources) have ranged from them finishing anywhere from 11th to 15th in the Eastern Conference.  Those predictions are founded in reality; to expect better would simply be the ramblings of pie-eyed, die-hard Senators fans.  For them to finish better than 11th, one would have to expect fully 18 players to exceed expectations with the three exceptions being Jason Spezza, who is a point per game player in almost any environment, Sergei Gonchar who has the unquestioned talent to be a 50 point player and Chris Phillips of whom there are little expectations with the exception of playing good defense.

Everything else is a lot of ifs.  If David Rundblad can be the puck moving 50 point defenseman he was in Sweden.  If Erik Karlsson can cut down his defensive mistakes by about 90%.  If Mika Zibanejad or Stephane Da Costa can step in to be a viable second line center.  If Jared Cowen can adapt his game to the NHL the way he was able to in the AHL at the end of last season.  If Daniel Alfredsson can hold together and be an effective player at age 39.  If Milan Michalek can rebound to be a 55-60 point player.  If the Craig Anderson can be the goaltender he was in 09/10 and at the end of last season instead of what he was most of last year.  If Nikita Filatov can effectively apply his talent and put in the effort necessary to be an NHLer.  If the Senators as a team can quickly adapt to and implement (Paul) MacLean’s system, then and only then will the Senators be more than the sum of their young parts. It’s just too much to expect.

The key is clearly Spezza.  If he can play a full season, the team can finish 11th.  Without him, the power play fizzles and Gonchar with it, Bobby Butler does not have an assist machine to set him up in the scoring areas and even the penalty kill suffers.  Yes, I said it; the penalty kill suffers.  If Spezza misses 20 game, 15th is staring them in the face along with a tasty draft pick.

I fully expect that the Senators will play lousy some nights and lose.  I also expect that they will play well many nights and lose. The interesting thing in this season is not where the Senators finish in the standings but in the progress they make in improving both as individual players and as a team.  The majority of the players who will eventually make this a playoff team are nowhere near ready to make that a reality and some of them are not yet on the team.  There is at least one more draft and 2-3 years of development before anything more than improvement is the measure of success for this team.  For some, that may be a depressing thought but not for me.  There are very few examples of teams going from lousy to very good in a quick manner.  Some teams continue to languish between lousy and mediocre for long periods because they do not have the patience to rebuild properly.  My depression will set in if I am sitting here a year from now telling you how the Senators have signed (fill in old, overpriced players here) in an effort to piece together a playoff team.

The Senators looked every bit the inexperienced team they are in a 4-2 loss to the Leafs.  The Senators were admittedly tight and nervous and it very much showed in their play.  The confused plays, fumbled pucks and turnovers are too many to count.  There were a few bright spots; Jared Cowen jumped up to tuck home a nice pass from Filatov and played a fairly sound game all around. Karlsson was flying around Leafs like they were standing still and Filatov was scary fast on a few rushes.  He was also allergic to any traffic or work along the boards but I was focusing on the positives, was I not?  That was about it.  Mark Stone was pretty non-existent and had trouble keeping up.  Zibanejad and Rundblad displayed their “first game jitters” for the better part of the night.  Filip Kuba was their best penalty killer (ugh!) and Colby Armstrong was the most noticeable player on the ice…and that is a little depressing.