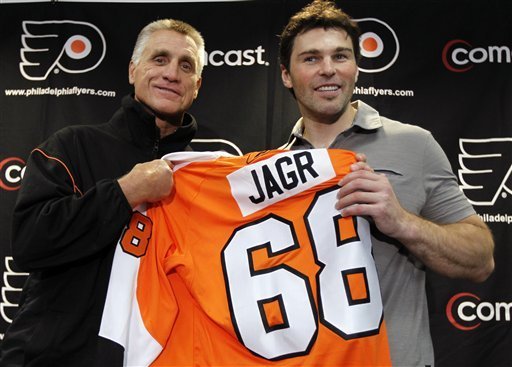 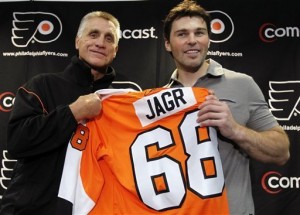 Sunday, the day generally reserved for football, and I find myself finally sitting down to watch it at approximately 3;30 PM. I throw the Bills/Pats game on for background noise while I prepare this meandering…

Looking back at the beginning of this past week, there seemed to be much discussion about the things that Jaromir  Jagr had reportedly been saying. Then came the obligatory “Jagr is digging himself a deeper hole” type of responses. I saw this all over the various social media forms and comments boards on a multitude of websites. I couldn’t help but thinking how flawed this thinking was because:

1. Jagr doesn’t have to answer to anyone but the folks who sign his paycheck in Philadelphia

2. $3 Million is still more than $2 Million – As if anyone would snub a paycheck that was 50% more than an another offer.

3. Who else recalls the original $11 Million request from a team that he knew couldn’t meet that demand financially?

4. Who else enjoyed the ensuing Collective Bargaining Agreement that trimmed that down to $7 million?

You see, my friends, he’s always had these painful behaviors and he will always have them. He’ll probably be a major pain to the Pens throughout this season, it wouldn’t be shocker but he has as much chance of winning a Stanley Cup as every player on the Florida Panthers roster, 1 in 30.

During a cool trip to see the Big 4 Show in Yankee Stadium recently,  Metz and I found time to hit up the NHL Offices and the NHL Store. While Shawn Rorke was giving us a brief tour (which was majorly cool, by the way), I happened to notice a row of “Vintage” hats that were for sale in the Store. There were teams like the Hartford Whalers, Winnipeg Jets, Quebec Nordiques , Atlanta Flames and the California Golden Seals all available for purchase. I thought this was really cool simply because I love to see the heritage of the NHL still available in some small degree. What I didn’t expect to see, a week after that trip, was the Atlanta Thrashers available in the “Vintage” section of the NHL website.

Somehow I never saw “Vintage” being the equivalent to “Clearance”

With the “Pegula-Mania” running wild in Western NY over the past few months (I am freely admitting that I am enjoying it to the point that I now own 2 season tickets for the Rochester Americans), I noticed a few people still sitting on the “I’m not buying into this again” fence.  Allow me a few points of reminder about Tom Golisano and his tenure in Western NY:

1. Clearly saving the Sabres from the Rigas debacle would garner some political boost from the voters (It didn’t and the jokes about Eliott Spitzer never get old)

2. Tom didn’t get rich by spending his money

3. He let the top 2 centers in the organization walk and unfortunately, Briere is a bigger pain in the butt now than he was then (Damn you, Flyers)

4. Tom was half of the problem that managed to put the farm club in Portland, Maine and leaving the Rochester Americans as fodder for the Florida Panthers. The FLorida F’n Panthers….let that sink in for a second. What makes that even worse? AHL scheduling is extremely brutal at times. There were years that I couldn’t even see the Baby Pens unless I wanted a serious drive…

So Pegula came in and not only bought the Buffalo Sabres, but he bought the Rochester Americans on top of that, all with the intentions of unifying the Sabres development system. He went out and acquired Christian Ehrhoff and Ville Leino during the Free Agency Frenzy. It wasn’t a great class, but……

Wait a second, The Bills just upset the Patriots? Screw this, I’m off to buy some beers now.