FTP predicts who will win the key NHL awards this evening in Las Vegas! 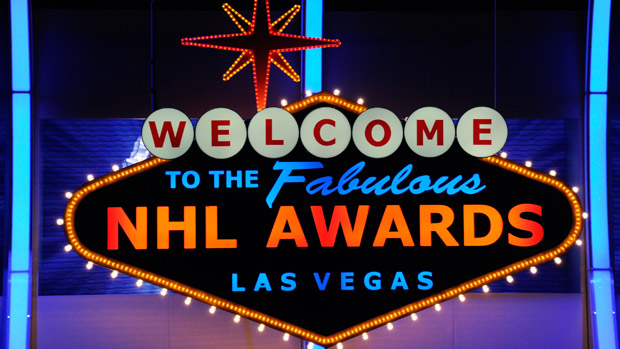 As I sit at the office missing out on all of the cool events surrounding the NHL Draft here in town such as street hockey on the bridge, Incline rides/prospect photos on Mount Washington and other random networking opportunities, I figured I would quickly chime in with my awards predictions for this evening.

Though most in Pittsburgh are anxious to see if Evgeni Malkin is indeed going to be named the Hart Trophy winner, there is a great deal of secondary hardware that is going to be presented as well. So without further adieu, here are my predictions…

General Manager of the Year:

Though each of the candidates did a great job this season, Dale Tallon’s work in Florida was sensational. Many criticized him over the summer when he handed out some head scratching contracts and traded for defenseman Brian Campbell, but at the end of the day, his work ensured that the Panthers would win their first division title and came within an overtime goal of knocking off the Stanley Cup runner up New Jersey Devils.

Not to take anything away from the other finalists, but Evgeni Malkin was the guy who performed at an MVP level throughout the season and his peers will recognize that here. Sure it is tough to overlook Stamkos and his 60-goal, Lundqvist and his 1.97 goals against average and 39 wins, but Geno carried the Penguins in the absence of Sidney Crosby and secured his second Art Ross Trophy. He was also instrumental in the emergence of James Neal as a 40-goal scorer and Chris Kunitz as a 60-point man.

Though Alfredsson had a resurgence that made it appear as if he had been drinking from the fountain of youth and Max Pacioretty returned from a scary injury caused by a collision with Zdeno Chara two seasons ago, it was Lupul who went from possibly washing out of the league to becoming an All Star in the span of six months. Though he missed the final few weeks with a separated shoulder, he was one of the best wingers in the league and is deserving of the Masterton.

Though Ken Hitchcock almost got our vote, it was MacLean that emerged out of this trio due to his being with Ottawa from the start of the season. He worked with a very young Ottawa team and turned them into a group that hovered near the top of the league for the better part of the season. Truthfully, the only guy who would have beaten him out on our ballot would have been Kevin Dineen of the Florida Panthers. Dineen could rightly be considered a snub, after being left off of the ballot in favor of Torts.

Though I have a feeling that the writers who actually voted on this award will lean towards one of the other two candidates, it is Patrice Bergeron who gets the nod. He has really emerged as one of the best two-way threats in the game and has a great ability to shutdown opposing forwards and win key face-offs.

All three are worthy candidates, but it amazed me that Campbell found a way to stay at 6 PIMs throughout the season while playing a position that is most often whistled for minor penalties. As a defenseman it is easy to get your stick up into the opposition as they try to score on you and he just doesn’t do it… some will say that is due to him being a softer player… I say it is because he is full of sportsmanship! Give him the hardware…

Had Ryan Nugent-Hopkins avoided the injury bug he would have been a hands down favorite here, but his missed time allowed Landeskog to open many eyes. He plays a hard-nosed game and showed an ability to score huge goals for the Avs throughout the later stages of the season when they were fighting for a playoff spot. He gets the nod…

Sure, I know it isn’t a scoring trophy, but many years it is. Besides, when you stir in the fact that he played huge minutes, in every situation and finished with a plus-16, you get a picture of a guy who is much improved defensively. He will likely yield to one of the others this evening, but he is our pick based on the huge strides he made in all facets of his game and the fact that he was on most nights, the best defenseman on the ice in any game that he played.

This was a tough one, as he was neck and neck with Jonathan Quick, but his stats put him over the edge. Hank was the most consistent goaltender on a night to night basis throughout the regular season and though Quick matches him in the “lack of goal support,” he single handedly won more regular season games for his team.

As we said above… Geno is the guy. It all came together for Malkin this season and he was a wire-to-wire MVP candidate. It will be hard to give this to anyone else…

Check back tomorrow to see how we did!