It really is almost a year that I wrote a piece defending Matt Cooke hitting Marc Savard under the premise that the hit was bad, but not illegal at the time of the incident. I even had to sit back and consider what I was thinking after he served a 2 game suspensions for this hit on Artem Anisimov. I won’t replay the Cooke/Savard incident because we’ve all seen it a million times. It was a nasty hit on a player who has had previous concussion injuries by a player with a history of questionable on-ice behavior.

I can even go so far as to see the argument for the hit on Alex Ovechkin on Sunday because Ovechkin does try to switch direction at the last second. I still think the hit is indeed questionable because Cooke leans into it what appears to be his shoulder, but the replay does indeed show the knee turning inward for the leg.  It’s not even close enough to consider the “skates clipped each other” argument that was presented as a defense.

Now we have Fedor Tyutin and this incident.

Per NHL Rules -43.1 Checking from Behind – A check from behind is a check delivered on a player who is not aware of the impending hit, therefore unable to protect or defend himself, and contact is made on the back part of the body. When a player intentionally turns his body to create contact with his back, no penalty shall be assessed.

So you can’t call that because Tyutin saw Cooke coming and maybe he didn’t because his defense partner was crossing that path when Cooke was cruising into the corner.

Per NHL Rules – 42.1 Charging – A minor or major penalty shall be imposed on a player who skates or jumps into, or charges an opponent in any manner.

Jumps into is the actionable offense here……Cooke clearly does this and puts the hit between the shoulder blades but here is where things get completely dumb:

Reportedly Matt Cooke will have a hearing on this latest incident today sometime…… I expect nothing but a good spin on the NHL Wheel of Justice.

When you further read the description under the NHL rules for “Charging”….

42.5 Game Misconduct Penalty – When a major penalty is imposed under this rule for a foul resulting in an injury to the face or head of an opponent, a game misconduct shall be imposed.

Tyutin got right back up after the hit…..

42.6 Fines and Suspensions – When a major penalty and a game misconduct is assessed for a foul resulting in an injury to the face or head of an opponent, an automatic fine of one hundred dollars ($100) shall be imposed.

So we won’t see the $100 fine, since no Game Misconduct was handed out……

I guess we are left with this….

28.1 Supplementary Discipline – In addition to the automatic fines and suspensions imposed under these rules, the Commissioner may, at his discretion, investigate any incident that occurs in connection with any Pre-season, Exhibition, League or Playoff game and may assess additional fines and/or suspensions for any offense committed during the course of a game or any aftermath thereof by a player, goalkeeper, Trainer, Manager, Coach or non-playing Club personnel or Club executive, whether or not such offense has been penalized by the Referee.

Personally, I just want to say this…. Mr. Cooke, I’m not your f**king lawyer but I might suggest paying out a retainer for one for the day you DO get sued by another player. There’s precedent, it can and probably will eventually happen.

One reaps what one sows… 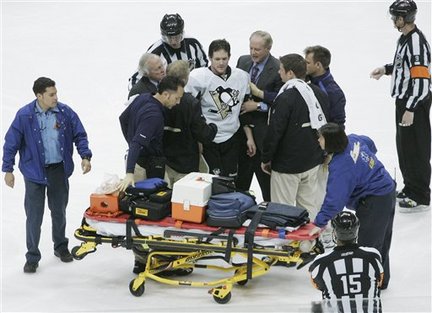