Sometimes these Blackhawks just need a good ol’ kick in the pants to take their game to the next level. That was the case in rounds one and two, and it has happened once again. 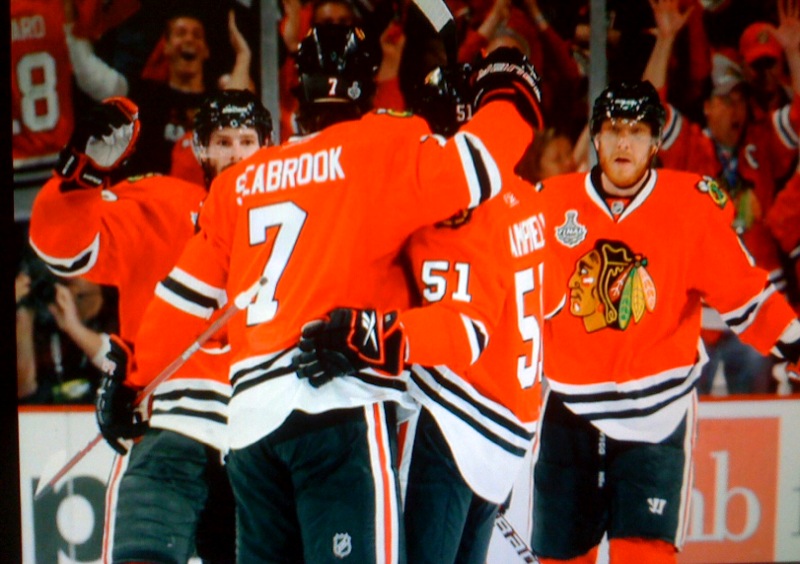 Sometimes these Blackhawks just need a good ol’ kick in the pants to take their game to the next level. That was the case in rounds one and two, and it has happened once again. With a 7-4 victory in Game 5, Joel Quenneville’s squad announced to Philadelphia and the rest of the hockey world that the Flyers will have to yank the Cup from their grasps.

Yesterday, I gave Quenneville some grief for his adjustments (or lack thereof) in Games 3 and 4. Well by breaking up the top line of Jonathan Toews, Patrick Kane, and Dustin Byfuglien, the ‘Hawks had a balanced attack that left even Chris Pronger dazed and confused.

With the previous top line being split up into three different lines, all three stars came up big tonight. Toews imposed his will, even though the stat sheet didn’t justify it (just one assist). He was excellent in all three zones, and once again had an edge in the faceoff dot. Captain Serious led the charge in the team’s frenetic start.

The two that did contribute in a big way on the scoreboard were Byfuglien and Kane. ‘Big Buff’ was the star of the night, racking up four points and nine (count ‘em, nine) thunderous hits… including a handful of big ones against Pronger. He was an absolute force. Kane scored a big goal in the 2nd period, and also setup Patrick Sharp’s (Chelsea) dagger goal late in regulation.

Byfuglien was inserted on to the third line with Dave Bolland and Kris Versteeg. That trio combined for nine points and was a thorn in Philly’s side all night.

The Blackhawks brought their ‘A-game’ from the onset, blitzing Michael Leighton and the Flyers like crazy! At one point in the first, the chances were 9-0 in favor of the ‘Hawks; and by the end of the first 20 minutes, they had stormed out to a 3-0 advantage.

Chicago could have taken their foot off the pedal as Philly switched goalies and turned their game up a notch. They didn’t. The Flyers tried to throw punches in the second period to rally back, but the ‘Hawks countered and matched their intensity/desperation for the last 40 minutes.

They capped off the game with Byfuglien’s empty-netter, assuring the Blackhawks were taking a 3-2 series lead back to the City of Brotherly Love.

Will the ‘Hawks play another home game this season? That’s up to the Flyers. Returning home for Game 6, Peter Laviolette and company has an extra day to regroup and find an extra gear before Wednesday’s contest.

Chris Pronger was not himself throughout (first minus-5 game of his career), and was bruised and battered by Chicago’s forwards all night. He and his team had a similar effort in the conference finals against Montreal in Game 3 on the road. They’ll need another great response to push this series back to the Windy City for a decisive seventh game.

For the Flyers to extend their season, they’ll have to storm out of the gates on Wednesday like Chicago did tonight; the ‘Orange Crush’ will certainly give them a boost.

Who will Laviolette turn to in net for Game 6? Michael Leighton got progressively worse in the first period, and was fighting the puck a bit even if he stopped it from crossing the line. He surrendered 3 goals on 13 shots. Brian Boucher wasn’t much better, though, which makes me think they’ll go back to Leighton. Either way, the Flyers will need better goaltending to have any hope of forcing a Game 7.

One of the advantages the Flyers have had all series was special teams. The ‘Hawks changed that by striking twice on the power play, and killing off three penalties. Chicago showed a lot of poise and urgency on the man advantage, which was the difference in them capitalizing twice.

All series we’ve stated that Quenneville’s bunch hadn’t played their best game. Well, they answered the bell and responded to a wakeup call on the east coast! The challenge now will be sustaining that success and playing their game in a hostile Wachovia Center.

It has been 49 years since Chicago has lifted the Holy Grail. Will that drought end on Wednesday? It will be a difficult task to grab a win in Philly – a place they haven’t won since 1996. But if they bring the same effort and can weather the storm that the Flyers will throw at them, Game 7 may not be necessary.