Keeping our Crosby comeback coverage rolling, Malkamania was also at the game last night and he gives us his take! 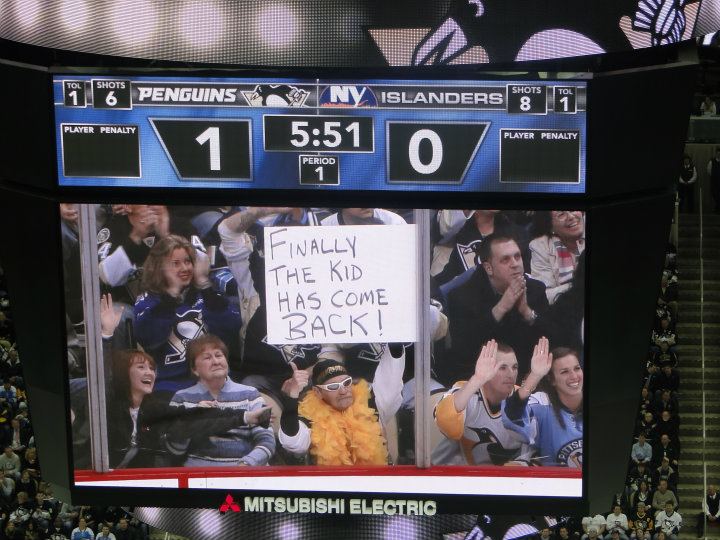 Opening night, Mario’s comeback, Game 7 in Detroit,  five  goals five different ways — you know where I’m going,  the Crosby return!  Glad I was there to witness it. There was so much excitement at the Verizon Gate as early as 5:30. I haven’t seen that many people waiting that long to get into a game in quite some time.  The electricity was in the air, scalpers working the streets as people were taking out second mortgages to secure a ticket to see number 87 step back onto the ice and play his first game in 320 days.

I could sense something big was going to happen as I walked around the CEC and watched people heading down to see the warm-ups.  I saw Melrose, Dreger, and of course my old buddy Pierre McGuire.  I have to admit I got a little carried away asking him how the Mrs. was doing and if he finally saw what leadership was all about.  I think the NHL should add Pierre to the next round of the Bleacher Creatures, just think of the fun we could have with that!

I guess we will never see Rick DiPietro start another game here in Pittsburgh. Was it the fact he’d get injured looking at our bench, injured making a save, or does Coach Capuano figure he should just save his goalie a heck of a lot of grief?  Amazing how Rick’s the only healthy goalie standing, now if you were to bet those odds…

Yes the place was loud and it roared and everyone was on their feet waiting to see just how long it would take “The Kid” to score.  Just 5:42 had expired when he roofed a nice backhand and added to his long list of folklore that we are so cherished to see again.  And I liked his response to scoring that goal, that would even make Lee Corso proud, wouldn’t you say?  I just wish I had the bullhorn!

Now, in your wildest dreams did you imagine 2 goals and 2 assists?  I have to admit my thoughts ran wild a little bit when Sid scored goal number 2 and I held the sign up “Let It Snow,” my favorite song since the night of the Hat Trick.  I love that video the Penguin game people put together.  I had my fingers crossed, but it was not meant to be, but heck a 4 point night.  This team, if it stays healthy, is gonna be lethal and everyone’s game is going to reach another level. 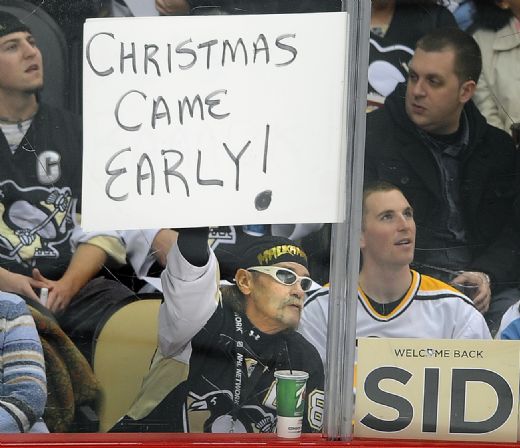 My friend Mike Bober and I were discussing the Dec 8th game in Philly and how much more fun that is going to be. I know I get a kick out of the Philly fans chanting Crosby sucks, hell I’ll even join them because as fast as you say Jack Robinson he buries one and the looks of those people is priceless. I’m counting down the days before I get to Philly and the Rocky sign. Will be fun times had by all!

Last but not least a few things.  As far as my outlook goes I’m up 15 pounds, eating better but it still burns a little bit. Hopefully when it comes time for Turkey Day I’ll be able to enjoy it like the rest of you.

Also, this holiday season; please keep Allen Stodolsky in your thoughts and prayers; he will be going to the hospital today for a few days of chemo treatments.  The treatments have been rough on him and he needs Penguin Nation to get him well and on the road to recovery.  Hang in there buddy we’re pulling for you!