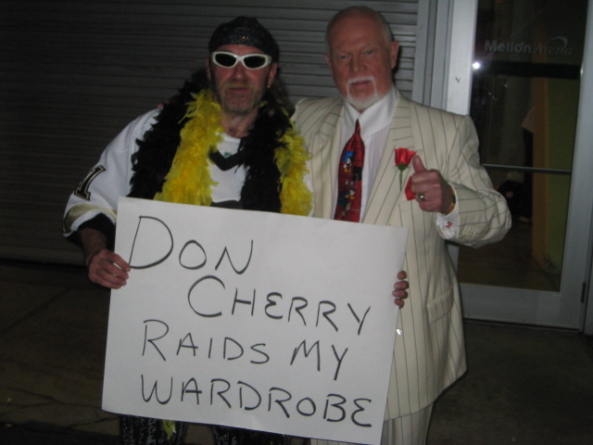 Cy Clark is back with another edition of Malkamania Running Wild! This time he shares the origin of his in game antics and how they have evolved along the way.

Somehow, I hear my wife saying these words under her breath, but in a good way.   I guess she figured she would have a calmer me this year… Yeah right.   So most tend to wonder, when did all of this insanity start.  I would say when I stopped going to games with my dad and going with friends. There was not a time I don’t remember telling Bobby Clarke and Bernie Parent they were number one after Pens/ Flyers games.   As far as the in-game shenanigans, yes, I can pinpoint when this all started going south.

The opponent? The Boston Bruins 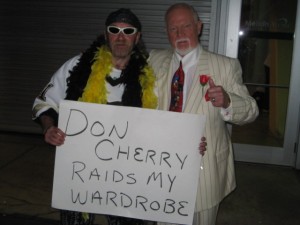 Boston was pretty much taking us apart in the best of 7 series.  During and after game 3 it seemed that some people behind the benches were giving Cherry beer baths (It wasn’t me!). He decided to take shots at the Pittsburgh fans, calling us names and saying his dog Blue had a better mentality.  You know me, that was it.  So I got to work “How could I make Don Cherry Mad? “.  I had it, and so did about 6 or 7 others.  I hung a Blue Stuffed Dog on the E balcony by a noose with the sign “Blue” on it.  Even though we lost 4-1 and were knocked out of the cup round, Old Vince would play “Let’s Go Pens” and the crowd yelled “Die Blue Die”.  I mean they were screaming it.  The funny thing is that two years later I named my Doberman Blue (another topic).

Then came the closest I ever was to be thrown out of a game at home ice; “The Charlie Simmer incident”.  We had done the usual, bought tickets for E then moved down to the glass against the Kings. This was 1981. We got to the glass, just what I was hoping for.  In about 5 minutes time we had a faceoff right where we were sitting, and Charlie Simmer was by the glass.  Up pops my playboy centerfold pic of Mrs. Simmer, Terri Welles.  My buddies just about died and all hell broke loose.  The ushers were having a fit, and with some schmoozing we were allowed to stay but we had to go back to our seats in the E balcony. 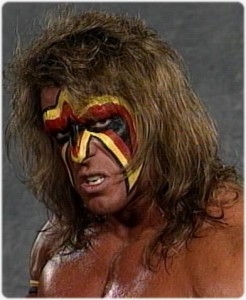 Then came the 1989 playoffs along with the 1991 and 1992 Stanley cup.  The Ultimate Penguin Warrior was born. A few signs, mainly it was the painted face and the yelling and screaming along with the others.  Do you remember the Adam Graves slash on Mario in 1992? My response the next game was a tombstone made out of dry wall, with Graves name date of birth and the date of the game 3 being his death May 7th.   We did lose this game in overtime, 6-5, but we all know the story of more Mario magic.  I’m sorry to say, only one pic was taken by someone I know but I don’t have a copy.  We didn’t take pics like we do today, but I will tell you this, I was on both cup videos and you would never believe it was me.

The 1993 playoffs, we all remember this disappointment.  Everyone and their mother, except me, picked the Isles to win in 7.  I still think too much emphasis was put on that damn winning streak thank you Scott Bowman. (More on this later)  We all remember the Dale Hunter/Pierre Turgeon incident.  Hunter shoves Turgeon into the boards and separates his shoulder.  And then back to the game 6 when they show Uwe Krupp hanging a Penguin on a noose off of his stick.  We Remember Krupp getting the OT goal in 1990 knocking us out of the playoffs and getting us the 5th overall draft pick. Who did we take with that pick again?? Well, I had to come up with something fast so I got my Islander jersey (The same jersey made famous by Fragile) and made a stuffed Turgeon Doll with his arm in a sling with a sign I Heart Dale Hunter.  Grant Jennings and Ulfie Laughed.  Kevin Stevens shook his head, and a few of the isles told me I was number 1 in their hearts.  Then we had the stuffed Beavis and Butthead Dolls from the rafters.  Anyone from Messier, Jim Carey, Brodeur ; their names and numbers were used (Pre Jersey spoof days) with either the Beavis or Butthead mask.  The Messier doll was a big hit, and got time on the jumbotron as I battled NY travelling fans in the stands from the F section.

Basically these antics were reserved for the playoffs, but in another article, I will take you into how this all evolved into a regular season ordeal.

As you all well know by now my doctor has proclaimed me cancer free! I am so humbled by all of the well wishers, if you only knew how much the prayers and your messages meant to me, God bless all of you.  And it’s a Hockey Night in Pittsburgh. The Habs are coming. Call the riot police! PK Subban…..beware!