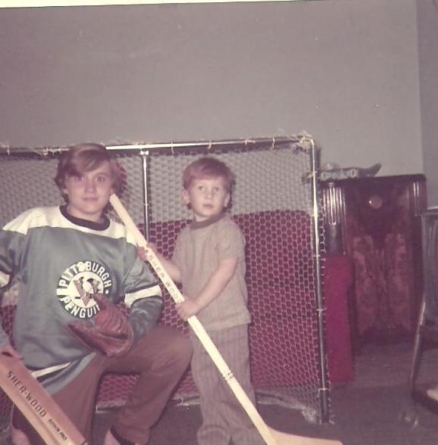 Cy Clark is back with another edition of his popular Malkamania Running Wild blog! This time he talks jerseys! 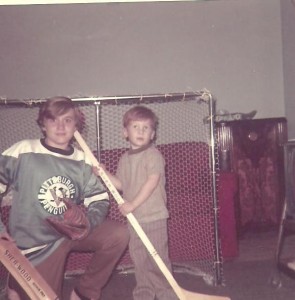 The question I get asked most often on Facebook, Twitter and down at the CEC is, “how many jerseys do you own?”   The answer,  I could not tell you how many I have had over the years.  The second question, “How much do they cost?”  I have lost track, and my wife would kill me if she knew the total anyway.   I do have a pic of me in my first Penguin Jersey and this would be circa 1971.   My first jersey with a number and a name would be Kelly 22 for Bob “Battleship” Kelly.  The “Battleship”  far and away was my favorite Penguin, followed closely by Rick Tocchet, again, a number 22.

Where do I buy my jerseys?  Well I can give you some insight on that.  Years ago I used to buy them at Rupp’s sporting goods in Dormont/Mt Lebo for those of you who would even remember the store.  I had every team,  home and away.  And yes, I have California, Hartford, Colorado Rockies, Kansan City, Quebec, Winnipeg and the Atlanta Flames.  This is where the majority of the jerseys came from that you see at games.  I have even picked up a few at flea markets, especially blank ones, which is another “place” we all know, love and use.

Now to discuss all of the Penguin jerseys I’ve bought throughout my time going to Penguin games, after I convinced my mom it was OK to wear a jersey instead of a white shirt and tie that is.  I think back to those days and just shake my head.  The roll call starts with Bob Battleship Kelly  22 then we had Laurouche 10 followed by George Ferguson  11 and then Greg Millen who wore 29.  Next up was Paul Baxter 4.  Then I bought another 22 jersey — Mike Bullard.  And now you can probably guess  who was next? The Big Guy of course featuring his 66. 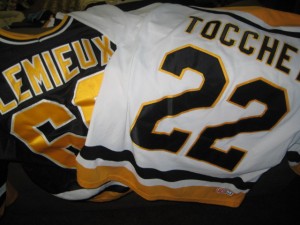 Now we get to the “other jerseys” you’ve seen at the CEC.  Some you like some you don’t.  I know for one, Val Porter (of the WDVE morning show) loves the “Ovary” jersey, which is also one of my favorites. I loved wearing it in Madison Square Garden by the glass and not a word was said. Another of course is “Fragile” for Rick Dipietro.  Heck I had that made due to his always getting hurt, hold it up on the  jumbtron  then next thing you know, Johnson fights him, and a shirt was born.  Also going up to the Island, winning a contest to sit in the isles penalty box and watch warm-ups.  They told me no Pens attire, I said sure and proudly wore Fragile in the box; once again nothing was said.

Last but not least, “Mrs. McGuire” for our buddy Mike Richards. We were all shocked on draft day when we saw the purging of Richards to LA and Jeff Carter to Columbus and I have to admit that I was kind of  bummed out thinking wow, all that is left to harass are Hartnell and Pronger.  Well as we all know Holmgren took care of the Philly rivalry for us.  Then my good friends Pat Mc Manus and Amy Balla and our buddy Bruce decided not to take a trip to Winnipeg, but they did schedule one that will take them to San Jose and LA.  I’m proud to say, I will be attending the Nov 5th game in L.A.  What’s that commercial say… Priceless? That’s what we’ll have when Mike Richards lays his eyes on that ‘Creepy Hulk Hogan guy’. And this time, I can tweet right along with him.  Thank you Pat, Amy and Bruce!